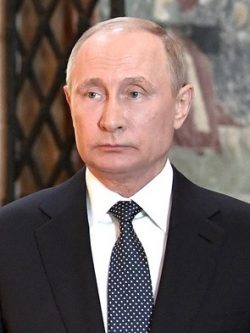 PUTIN, Vladimir Vladimirovich (b.1952) is a current President of Russia and Commander-in-Chief of the Russian Armed Forces. Born in Leningrad (Saint-Petersburg), he graduated from Leningrad State University with a major in law in 1975. By the early 1980s, Putin graduated from Moscow KGB Higher School No. 1. Since 1977 he worked in the investigative department of the Leningrad KGB Directorate. From 1985 to 1990 he served in the Soviet foreign intelligence residency in East Germany. He worked in Dresden under the guise of director of the Dresden USSR — GDR House of Friendship. On August 20, 1991, he quit the KGB with the rank of lieutenant colonel.

In 1991-1996 he worked as an assistant to the rector of Leningrad State University (Anatoly Sobchak) on international affairs, headed the Committee on External Relations of the Mayor's Office, was an adviser to the Mayor (Anatoly Sobchak), First Deputy Chairman of the St. Petersburg government. In August 1996, he moved to Moscow and was appointed Deputy Chief of the Presidential Property Management Department and later — deputy chief of the Presidential Staff. Between 1998 and 1999 he was a Director of the Federal Security Service (FSB), a successor to the KGB. On 9 August 1999, Putin was acting Prime Minister. On December 31, 1999, he was appointed Acting President of the Russian Federation, by the decision of Boris Yeltsin after his unexpected resign. On March 26, 2000, he was first elected President of the Russian Federation.

Usurpation of power, corruption, organization of terrorist attacks, violation of the territorial integrity of sovereign states, and the outbreak of aggressive wars.

In 1999–2000 Putin was appointed the successor to the previous President of the Russian Federation, Yeltsin, bypassing democratic procedures. The transfer of power was carried out gradually, by appointing him the Director of the FSB, then the Chairman of the Government, and then the acting President of the Russian Federation, which helped Putin to concentrate power in his hands before he was officially elected President, and gave him tremendous competitive advantage in comparison with other candidates. In the 2000 presidential election, Putin received virtually unlimited financial, informational and power resources that enabled him to be elected president in the absence of real competition.

In September 1999, a series of terrorist attacks took place in Moscow, Buynaksk, and Volgodonsk. As a result of the apartment bombings, 307 people died, more than 1,700 were injured. According to the official version, the attacks were organized by “Chechen fighters”, however, after sugar bags, allegedly stuffed with RDX, were found in the basement of an apartment building in Ryazan and the intelligence agencies gave an explanation that the incident was just exercises, serious suspicions arose in the society that the FSB might be the organizer of the attacks. Given the fact that the terrorist attacks and the ensuing fight against terrorism, proclaimed by Putin, took place against the background of preparations for the election of the President of the Russian Federation, the hypothesis of the FSB involvement in the attacks could be completely justified.

In 1999, after the apartment bombings, Vladimir Putin unleashed the second Chechen war, in which thousands died on both sides. However, these events made Putin look like a patriot, which he used to win the election.

In 2003, he initiated the Yukos case — the criminal prosecution of the main co-owners of the Russian company Yukos Oil Company Mikhail Khodorkovsky and Platon Lebedev, as well as a number of its employees and organizations affiliated with Yukos. The subsequent bankruptcy led to the transfer of the Yukos assets to the companies close to Putin, especially Igor Sechin’s Rosneft.

In 2008, he formally transferred power to Dmitri Medvedev, allowing him to become President of the Russian Federation while retaining the main levers of power in his hands, which was firmly expressed by Medvedev’s voluntary refusal to run for President in 2012.

The operation to formally replace Putin with Medvedev as president of the Russian Federation became known as a “castling” in society, which emphasized the formal nature of this procedure. Replacing Putin with Medvedev was due to a constitutional ban on the same person holding the presidency for more than two consecutive terms. The actual appointment of Medvedev as a successor made it possible to circumvent this ban, retaining most of the power, while placing a controlled and dependent person on the presidency. The operation “Successor” carried out with the participation of Dmitri Medvedev became a convenient form of usurpation of power, which did not require a change in the Constitution and should not cause questions from the international community.

In 2008, Dmitri Medvedev, formally president, but actually only a part of Putin’s system of power, unleashed a war against Georgia, occupying part of its territory. These actions were carried out with the support and approval of Vladimir Putin.

In 2012, Putin was re-elected to the post of President of the Russian Federation, thereby retaining the full power in Russia.

In 2014, he unlawfully annexed the Crimean peninsula, contrary to international obligations of the Russian Federation, and later unleashed a war in the South-East of Ukraine in Donetsk and Luhansk regions, which led to thousands of victims.

In 2018, he again became the President of the Russian Federation. Again, there was no real competition in the election. Real opposition candidates were not allowed to participate. All informational, financial and administrative resources of the state worked for the “reelection” of Putin as President of Russia.

For 20 years from 1999 to 2019, Putin has consistently concentrated all power in his hands, effectively implementing a usurpation of power that led to the establishment of a one-man, personalistic dictatorship in Russia.

During his reign, Putin carried out a large-scale attack on the civil, political and socio-economic rights of citizens of the Russian Federation, deprived them of access to electoral procedures, formed a closed, controlled political system with the “United Russia” party’s monopoly, suppressed civil society in all its forms (NGOs, public organizations, movements, etc.), carried out repressions against opposition.

During Putin’s reign, intelligence agencies and secret police gained enormous power. The FSB has taken control of all spheres of society from business to culture. In addition to the FSB, there was created a specialized organization for the fight against dissidents — the Main Directorate for Combating Extremism of the Ministry of Internal Affairs, popularly referred to as the “Center E”, “CPE” or “Estapo”, which actually performs the functions of political police in Russia, persecuting opposition leaders and activists.

Under Putin, corruption in Russia has reached unprecedented proportions. Putin’s close associates and their relatives actively used their position for personal enrichment, making big fortunes in the civil service or business closely linked with the state. In fact, Putin and his cronies became the direct “owners” of the Russian Federation, all its wealth and resources.

What is Russian President Vladimir Putin’s net worth?