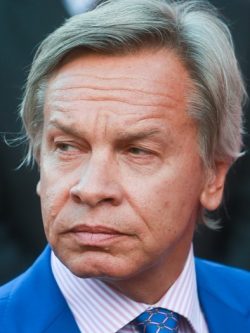 PUSHKOV, Alexey Konstantinovich (b. 1954) is a Russian politician and TV presenter. Born into a Soviet diplomat family in China, he graduated from the Moscow State Institute of International Relations (MGIMO) in 1976. After graduation, he worked at the UN office in Geneva. In 1979 he defended his Ph.D. thesis on the topic “The crisis of the basic political concepts of the Anglo-American bourgeois Sovietology”. In 1988-1991, he was a speechwriter for Mikhail Gorbachev. Between 1991 and 1995, he was deputy chief editor of the Moscow News weekly, chief editor of the English, French, German and Spanish editions of the newspaper. In 1993–2000, he was a member of the editorial board of Foreign Policy magazine. In 1995-1998, he was Deputy General Director, Director of the Directorate of Public Relations and Media, Director of the Directorate of International Relations of ORT TV. Since 1998, he has been the head and presenter of the Postscriptum program on the TVC channel.

From 2008 to 2011, he was the director of the Institute of Actual International Problems (IAMP) of the Diplomatic Academy. In 2011-2016, Pushkov was a member of the State Duma, chairman of the Committee on Foreign Affairs, a member of the United Russia faction. In 2012-2016, he was the head of the Russian delegation to PACE, vice president and member of the PACE Bureau. Since 2016 he has been the Member of the Council of the Federation of Russia, Chairman of the Interim Council of the Federation Council for Information Policy and Media Relations

Active long-term complicity in the legitimation and propaganda of the Putin regime, as well as of the direct implementation of the criminal policy of the Russian leadership.

The main basis for Pushkov’s accusation is his participation in propaganda activities as a TV presenter and zealous service in the highest positions of the ruling regime’s hierarchy. The aggressive and frankly propaganda style of Pushkov’s “informational and analytical” program on TVC channel has made him Putin’s full-time propagandist. Pushkov openly admits that he is actively participating in the information war: “The modern information war takes new forms, and we consider it necessary to respond to this”. In an interview given on the 20th anniversary of the Postscriptum program, Pushkov also confirmed the use of old methods of Soviet propaganda - to switch the attention of the Russian audience from internal socio-economic and political issues to the international agenda.

In December 2013, Pushkov, criticizing the resolution recommending the EU to adopt the European Magnitsky Act, similar to the American one, called it “an exercise in hypocrisy, double standards, and anti-Russian rhetoric” and called on Russia to impose its sanctions against human rights violators in the West. As one of the leaders of the State Duma of the Russian Federation, bearing personal responsibility for aggression against sovereign Ukraine and violation of international law through the occupation and annexation of Crimea, in 2014 he was included in the sanctions lists of the United States, Canada, and Australia. In August 2014, Pushkov was included in the list of 49 journalists and heads of Russian television channels who are denied entry into Ukraine.

Pushkov has always actively supported and promoted the criminal aggressive international policy of the Putin regime to neighboring countries, not only as a TV presenter but also as an active user of social media, namely Twitter. According to the Medialogy rating, Alexey Pushkov was in the top 15 of the most cited Russian bloggers for 2017.

Pushkov, like most of his fellow propagandists, was repeatedly accused of duplicitous behavior, allowing them to receive extra income for the frantic “patriotic” anti-Western rhetorics and at the same time to take advantage of the Western lifestyle for themselves. Pushkov spends lots of money earned for his anti-Western propaganda in the West. He travels to Western Europe much more often than he meets voters in his constituency in Perm. Pushkov’s daughter, who is also a propagandist (for RT and Kiselyov’s Vesti), also prefers European ski resorts to Russian ones. The Putin regime rewards him with the highest state awards, including the orders “For Merit to the Fatherland”, “Friendship”, “Honor”, the medal “To the Participant of the Military Operation in Syria”, as well as thanks from the President of the Russian Federation.