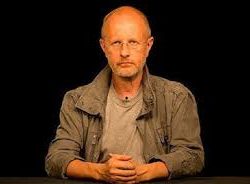 PUCHKOV, Dmitry Yuryevich (b. 1961 in Kirovograd) grew up in Leningrad and studied at the Leningrad College of Aviation Instrumentation and Automation, which he did not graduate from. From 1980 to 1982, he served in the Soviet Army. Until the early 1990s, he changed many professions in Leningrad and Uzbekistan, where he lived for two years. In 1992, he joined the police, became a dog handler, and graduated from the St. Petersburg Special Police School. For several years, he worked as a warder in the internal prison of the Central Internal Affairs Directorate on Liteiny Avenue, where he received the nickname Goblin. He quit (according to other sources, was fired) from law enforcement in 1998.

In 1999, Puchkov created a personal website and blog - Oper.ru (Tynu4ok Goblina). He became famous after he released several unlicensed translations of various Hollywood movies and computer games as a voice actor. Subsequently, he released a series of books and computer games based on his voice acting. On his website, he also regularly wrote articles on socio-political issues, mainly advocating for the Soviet totalitarian regime and criticizing the Russian opposition.

In 2007, he created his channel on YouTube, where he gives lectures on history, cinematography, computer games, and even reads out recipes. Since 2014, he has been conducting a series of interviews on his channel with various pro-Kremlin and pro-Soviet politicians and cultural figures. In 2019, he asked Vladimir Puti about a new law on punishment for distributing fake information, proposing to introduce criminal liability for fake news.

Active participation in inciting anti-Ukrainian hysteria and propaganda of the Putin regime.

Dmitry Puchkov, one of the most famous bloggers of the 2000s, with over one and a half million subscribers on YouTube, is still one of the leading personalities of the Russian Internet. He had already been known for his anti-Western and pro-Stalinist views, preferring, however, to go on vacation to the West, but with the onset of Russian aggression against Ukraine, he became a full-scale part of the Kremlin’s propaganda machine.

Puchkov was one of the first Russian propagandists to call the Revolution of Dignity in Ukraine a “brown coup” and started to intimidate Russians by the “rampant fascism in Ukraine.” In his Youtube channel, he repeatedly spoke with the leaders of pro-Russian militants and fully supported the Kremlin’s aggression against the sovereignty and territorial integrity of Ukraine. As it turned out in September 2014, he did it not for free. According to a published copy of the contract between Puchkov’s studio and the Russkiy Mir Foundation (established by Vladimir Putin) on January 16, 2014 (shortly before the annexation of Crimea and the war in eastern Ukraine), Puchkov received a grant of 20 million rubles. Its condition was “the popularization of the ideas of the Russian world on the territory of the eastern (southeast) regions of Ukraine,” as well as “the formation of a positive attitude towards the history of the Great Patriotic War, the cultural and social heritage of the USSR.”

It is noteworthy that his support for the criminal prosecution of distributors of fake news does not prevent him from participating in the distribution of fakes. In particular, in 2017, he published a photo from the G20 summit in Hamburg, which showed Putin sitting like a king surrounded by Trump and Erdogan clinging to him. In fact, in the original, the chair on which Putin “sat” was empty. Besides, he fiercely defended the Twenty-Eight Panfilovites movie based on the fictional Soviet propaganda story from critics, noting that “I see nothing bad in propaganda itself.”