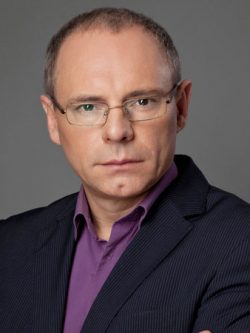 PROKOPENKO, Igor Stanislavovich (b. 1965) graduated from the Tver Suvorov Military School, served in the Air Defense Forces, and then graduated from the Donetsk Higher Military-Political School of Engineering and Signal Corps as a political instructor. After serving in the army, he took up journalism. He had been a military columnist for the newspapers Krasnaya Zvezda, Moskovsky Komsomolets, and Rossiyskaya Gazeta since 1989.

In 1990, he covered the Ossetian-Ingush conflict and the first Chechen campaign as a war correspondent on leading federal TV channels and radio studios of the Ministry of Defense. In 1995, he shot a documentary for ORT, and in 1996-1997, he hosted the Prisyaga (Oath) program on the RTR channel. Since 1998, Igor Prokopenko has been collaborating with REN-TV. Since September 6, 1998, she has been the host of the Military Secret program, and since 2004, she has been the Deputy General Director of the channel for political and documentary broadcasting. In 2006, he headed the channel’s documentary projects department. Since October 16, 2012, she has been the host of the Territory of Delusions program, and since June 15, 2015, the host of the Most Shocking Hypotheses program.

Anti-Western and anti-Ukrainian propaganda, the dissemination of fake news and conspiracy theories in the interests of the Putin regime.

The propagandist of the Kremlin and flat Earth Igor Prokopenko demonstrates the devolution of Russian television and documentary in particular. A former political instructor who turned out to be unnecessary to the army after the collapse of communism, he quickly turned into a military journalist. Indeed, he was one of the stars of investigative journalism in the heyday of REN-TV and collected numerous television awards. However, when the political instructors became again in demand by the authorities, he preferred to return to the propaganda genre. The once independent TV channel is now associated with the spread of bizarre anti-Western conspiracy theories, especially since the start of the anti-Ukrainian campaign in 2014.

Prokopenko was one of the first to join the inciting anti-Ukrainian hysteria. Already in 2014, he wrote the book “The Whole Truth About Ukraine. Who benefits from a split in the country?” There, he retold all the main points of Russian official propaganda and questioned the legitimacy of the existence of Ukraine as such. In an interview about this book he said that “The myth of Ukraine was written by the Polish historian Tadeusz Czacki in 1843.”

Igor Prokopenko, besides being the host of three pseudoscientific programs on federal TV, is also an extremely prolific writer whose books are printed in huge print runs. In this field, he serves as one of the drivers of anti-Western propaganda aimed at the least educated segments of society. In particular, in 2016 he released a book with the title “Evil Myths about Russia. What does the West say about us?”

In his November 12, 2013, Military Secret program, he stated that US President Barack Obama requires Americans to sew microchips under their skin, and as an illustration, he showed a subbed video where Obama talked about social health programs. On October 14, 2017, he announced that Russian electronic jammers could easily extinguish American electronics, and referred to the opinion of three “US military experts” as evidence. As it turned out, two of them turned out to be people from the photobank, including the popular hero of memes Harold, and the third turned out to be an American general, but he never spoke about Russian technology. On September 25, 2017, in The Most Shocking Hypotheses program, Prokopenko presented the theory of a flat Earth without critical annotation. It is noteworthy that in the same year, Prokopenko became a winner of the Russian Academy of Television Prize in the “Education Program” category.

Here, for example, is a typical passage from Prokopenko’s program “Territory of Delusions”:

“It's hard to believe, but according to the secret plan of the Americans, by 2030 there will be no state on the political map of the world called “Russia”. Americans call Russians enslaved people and plan to divide Russia into small parts (the Anaconda Loop plan). [...] it was the members of the powerful Heidelberg Club (Rockefeller, Rothschild, Soros) who brought Gorbachev to power to destroy the Soviet Union and gain access to its natural resources. [...] The Heidelberg Club conducts not only economic but also cultural attacks on our country. The Pussy Riot case, which is actively promoted by the chief media editors who are members of the club, is also initiated by the almighty Heidelberg elders and is aimed at undermining the image of democratic Russia. Meanwhile, America itself is about to fail apart: Americans are standing in humiliating lines for food stamps and every day there are more and more of these lines. Most Americans over 60 have no teeth!”

Putin's Russia has stepped into the era of post-truth and fake news much deeper than other countries. REN-TV is the undisputed champion in the concentration and absurdity of false information from federal television channels and contributes to the political disorientation and apathy of the Russians. Prokopenko generates the fear and insecurity of the viewer in own reality and in the ability to influence own life. The only hope and savior of Russia and a “little individual,” according to Prokopenko, is Putin. All the other propagandists are doing the same thing through more “elegantly.” They no longer care about reputational costs, which means that it is necessary to find other ways to change their behavior.