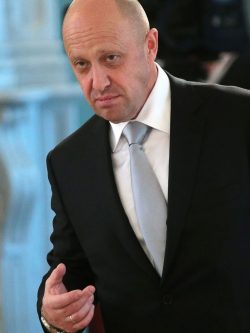 PRIGOZHIN, Yevgeny Viktorovich (b.1961) is a Russian businessman, owner of the catering businesses, linked to the internet “troll factory” and a mercenary group Wagner. Born in Leningrad, in 1979, at the age of 18 he was sentenced for stealing and in 1981 he was also sentenced to twelve years imprisonment under articles of robbery, fraud, and involving teenagers in prostitution, spending nine years behind the bars. After release from imprisonment, in 1990, he started his fast-food business which later evolved into a restaurant and catering empire. Prigozhin's restaurants were in demand among the St. Petersburg political and criminal elite, and so he met with Vladimir Putin. Following Putin, he moved to Moscow and took up catering contracts for public schools and the Russian army. In 2012, his companies got over 90% of catering contracts in military units. Yevgeny Prigozhin often referred to as “the Putin’s cook” for his sumptuous banquets at the inauguration of President Putin. In addition to the restaurant and catering business, Yevgeny Prigozhin also participates in large-scale construction and media projects. In 2014, Prigozhin created the Federal News Agency — one of the largest pro-Kremlin media holdings in Russia.

According to the Investigation Management Center, Prigozhin was involved in a murder. In 2004, the FSB opened a case on the death of Dmitri Sokolov, who drowned after a conflict with Yevgeny Prigozhin. On August 15, 2004, Yevgeny Prigozhin hit Dmitri Sokolov, outraged that Sokolov boarded his restaurant-ship New Island without permission. Sokolov fell into the water and drowned. It is noteworthy that criminal cases on Sokolov’s death disappeared shortly.

Prigozhin became famous for his role in financing propaganda, “internet trolls” and fake news. In September 2013, journalists found a “troll factory” (“Internet Research Agency”) in St. Petersburg, whose employees were paid for posting comments on the Internet criticizing the opposition and in support of Putin’s government. Funding for that activity came from the Prigozhin’s companies. In 2016, BBC Russian Service found a connection between Yevgeny Prigozhin's media projects and the beating of opposition members in St. Petersburg. One of the websites belonging to his media group published personal data on over 800 opposition members who received life threats. Prigozhin’s structures are also allegedly involved in attacks on the opposition during the 2019 Moscow City Duma elections.

In 2018, special prosecutor Robert Muller accused Prigozhin of running the “troll factory”, which was at the forefront of Russian interference in the 2016 election. According to the files, the Internet Research Agency waged an information war against the United States by creating fake social media accounts and spreading false news. European intelligence agencies also accuse this structure of disseminating false information in social networks in order to exacerbate social and political contradictions in the West.

Prigozhin is associated with Dmitri Utkin, the head of the Wagner PMC and reportedly is a key sponsor of the mercenary group. That group that took part in the Russian armed intervention in Ukraine in 2014–2015, and in the Russian Syrian campaign. In June 2017, Wagner PMC was included in the U.S. sanctions list. In 2018, journalists Orkhan Dzhemal, Alexander Rastorguev, and Kirill Radchenko who investigated the activities of Wagner PMC in the Central African Republic were allegedly assassinated by the members of the group.

In 2016, Yevgeny Prigozhin the US Treasury Department included him in the US sanctions list for his role in the Russian-Ukrainian conflict. In 2017, his companies, Concord Catering, and Concord Management and Consulting were included in the extended sanctions list. In 2018, Euro Polis and the Federal News Agency, also owned by Prigogine, also fell under American sanctions for funding and organizing operations for the purpose of interference with the U.S. political and electoral processes, and other crimes including identity theft.

Putin’s ‘chef’ accused of trying to cover his tracks