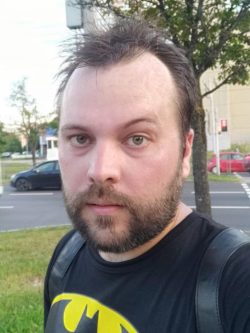 Russian and Belarusian journalist and media manager. An employee of the government-owned TV channel RT, one of the hosts of the RT-owned YouTube channel “Beautiful Russia boo-boo-boo,” aimed at deliberately defaming the opposition to the Putin regime. He is known for calling for the murder of active members of the Belarusian opposition, in particular, the captured co-founder of the NEXTA resource Roman Protasevich.

Born on July 22, 1989, in the city of Vorkuta of the Komi Republic (according to other sources, in Izhevsk). He lived for a long time in Belarus, where he began his journalistic career as a host of a morning show on radio Belarus-1. He is currently a correspondent for the Russian propaganda TV channel RT in Minsk.

Propaganda of hatred and open calls for violence against Russian and Belarusian opposition figures and protesters.

He is known for several hate speeches addressed to the Belarusian oppositionist and ex-administrator of the NEXTA telegram channel Roman Protasevich whom he called a “terrorist” and called to “kill” him on his Telegram channel, and then wrote an angry post of dissatisfaction about his transfer to house arrest. He also incited hatred against the citizens of Belarus participating in the protest against the regime of Alexander Lukashenko, calling them “specifically stupid” on the YouTube channel of his colleague in the “propaganda workshop” Vladimir Solovyov. On the whole, Pridybailo does not favor the anti-Lukashenka opposition: “If it were my will, I would be a bloodier tyrant than Lukashenka, it seems to me. I just even know where they live in Vilnius and Warsaw. I even know their favorite restaurants. If I had my way, I would have poured poison on them in these restaurants” (quoted from the same broadcast with Solovyov). Konstantin's angry speeches provoked a response from angry listeners, and the corresponding issue of “Beautiful Russia boo-boo-boo” was even devoted to “harassment of Pridybailo.”