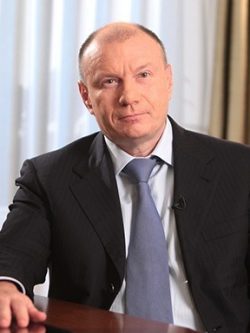 Owner and President of the lnterros Management Company

POTANIN, Vladimir Olegovich (b.1961) is a Russian oligarch, one of the wealthiest men in Russia. Born in Moscow into a family of Soviet nomenklatura, in 1983 he graduated from the prestigious Moscow State Institute of International Relations with major in international economics. Throughout the 1980s, he worked in the departments of the Ministry of Foreign Trade of the USSR. At that time he was reportedly recruited by the KGB. In 1990, he joined the International Bank for Economic Cooperation and headed by Foreign Economic Association Interros. His partner was Mikhail Prokhorov and together they established the International Financial Company Bank and ONEXIM Bank in the early 1990s.

Potanin was one of the initiators of the controversial loans-for-shares program in 1995, and thanks to them he acquired his largest assets in metallurgy, industrial production, and the oil industry. From August 14, 1996, to March 17, 1997, Vladimir Potanin was the First Deputy Chairman of the Russian government overseeing economic issues including antitrust regulations and state-owned property management. In 1998, Potanin headed the Interros holding company based on the Interros, Norilsk Nickel and Sidanko groups. In 2008, he accumulated 100% shares of Interros. He is officially the 6th richest man in Russia with an estimated net worth of $19.1 billion (2019).

Financial and organizational support for the Putin regime.

Vladimir Potanin has repeatedly participated in conflicts with other oligarchs, in particular, with Deripaska and Prokhorov, but he always maintained the loyalty to the current government. In 1996, he was one of the sponsors of the Yeltsin presidential campaign. When Putin came to power, he became one of the sponsors of the United Russia party through his the Development of Regions Foundation. In July 2003, Potanin took part in the All-Russian Forum of the United Russia party supporters. He maintains friendly relations with Putin and regularly plays hockey with him.

Vladimir Potanin is one of Putin’s wallets — oligarchs who are ready to invest in projects with state participation that are politically beneficial to the Kremlin in exchange for non-competitive government contracts. Such projects may include various construction projects and more delicate initiatives abroad. Potanin was one of the initiators of the idea of the Olympics in Sochi and invested $700 million in it. After the illegal annexation of Crimea and the imposition of sanctions against Russia, Potanin said that he was ready to build up tourism infrastructure in the Crimea on the federal budget money.

In 2018, during the investigation into the Kremlin’s interference in the U.S. election, the FBI found a connection between Vladimir Potanin and a software company for the Maryland State Board of Elections. Due to this circumstance and his close relations to Putin, Potanin appeared on the US Treasury’s “Kremlin list” of 210 oligarchs and public officials — the pillars of the Putin regime.

Meet Vladimir Potanin, the richest documented man in Russia, who made his $22 billion fortune in the nickel industry, has owned at least 3 yachts, and plays ice hockey with Vladimir Putin