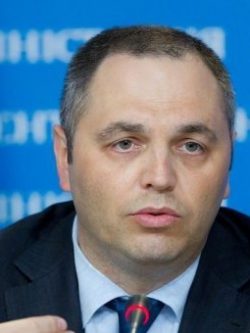 PORTNOV, Andrey Vladimirovich (b. 1973 in Luhansk) after serving in the army in the early 1990s, worked as a legal adviser, then as a lawyer in Luhansk. In 1996, he headed the Ukrinformpravo law firm in Luhansk. In 1999, he received a law degree from East Ukrainian State University. From 1997 to 2004, he worked in the State Commission for Securities and Stock Market, starting from the position of chief specialist and reaching the posts of assistant chairman, head of a group of assistants and advisers to the chairman, and finally the Head of Corporate Finance and First Deputy Executive Secretary.

In 2006, he was elected People's Deputy of Ukraine from the Bloc of Yulia Tymoshenko (BYuT). In the early parliamentary elections of 2007, he was re-elected to parliament on the BYuT list. There, he joined the Committee on Justice. In 2008, he was elected deputy head of the BYuT faction and the head of the legal department of BYuT. In May 2009, he became a member of the High Council of Justice. In April 2010, he became the Deputy Head of the Presidential Administration of Ukraine and head of the Main Directorate for Judicial Reform and the Judiciary. On January 16, 2013, he was appointed the Advisor to the President of Ukraine, and on January 24, 2013, the First Deputy Head of the Presidential Administration of Ukraine.

On February 22, 2014, after the victory of Euromaidan, he left Ukraine, first lived in Russia, then received a residence permit in Austria. On February 26, Acting President of Ukraine Oleksandr Turchynov dismissed Portnov from the post of the First Deputy Head of the Presidential Administration. From August to October 2018, he owned the NewsOne TV channel. On May 19, 2019, he returned to Ukraine and filed a statement with the State Bureau of Investigation alleging former President of Ukraine Petro Poroshenko's criminal actions during the conflict in the Kerch Strait. On May 23, he was questioned by the Prosecutor General in the case of his crimes during the Euromaidan.

Promoting the implementation of the criminal plans of the Russian authorities to destroy the principles of international law, peace policy, democracy, and anti-corruption.

The basis of the accusation is the official high position in the administration of the pro-Putin president Viktor Yanukovych, active participation in the legal and political support of the interests of pro-Kremlin political forces in Ukraine, including during the Euromaidan, as well as complicity in the annexation of Crimea.

During the Euromaidan, he was a member of the working group to resolve the political crisis, along with President Viktor Yanukovych and Minister of Justice Elena Lukash. He was considered one of the authors of the bills of January 16th (“the dictatorial bills” that provoked an escalation of violence during the mass protests in Kyiv in winter 2014), advocated for the legislation but denied participating in their drafting.

On February 28, 2014, the Prosecutor General of Ukraine demanded that Andrey Portnov be detained by the Ministry of Internal Affairs and the Security Service of Ukraine. On March 6 of the same year, the European Union and Canada imposed financial sanctions on him, among other high-ranking Ukrainian officials of Yanukovych administration. The EU lifted sanctions against him on March 5, 2015. In October 2015, an EU court ruled in the Portnoy v. EU Council case, recognizing that sanctions only based on cooperation with the previous regime were unacceptable.

During the trial against Viktor Yanukovych, the Ukrainian special services provided telephone recordings of the assistant to the Russian President Sergey Glazyev, from which it follows that Portnov participated in the elaboration of the statement of the Supreme Council of the Autonomous Republic of Crimea, which gave the appearance of the legitimacy of the occupation and annexation of Crimea by Russia in March 2014.

Indirect evidence of the accusation is that having left Ukraine, Portnov received a three-year temporary residence from the Russian authorities already on May 25, 2014.