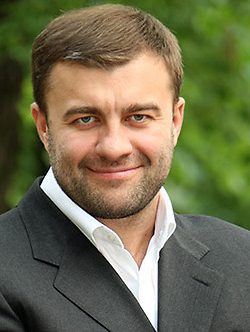 PORECHENKOV, Mikhail Evgenyevich (b. 1969 in Leningrad) studied at the Tallinn Higher Military-Political Construction School from 1986 to 1990 but was expelled from there for repeated violations of discipline. He enrolled in the Gerasimov Institute of Cinematography but also dropped out. In 1991, he entered the Russian State Institute of Performing Arts and graduated from it in 1996. After graduation, he began performing in the Theater on the Kryukov Canal and in the troupe of the Academic Theater.

His name became well-known after he played the main role in the Agent of National Security series. Noteworthy that the release of the series with the main positive hero, an officer of the FSB, coincided with the elevation of the FSB director Vladimir Putin to power. Mikhail Porechenkov's filmography includes over seven dozen projects. Usually, Porechenkov plays the role of a security official, forming a positive image of the FSB and the police in society.

A promoter of Russian militarism, Porechenkov never hid his political position. Back in 2007, he starred in a campaign for the United Russia party. According to him, he took part in the Russian invasion of Georgia in 2008. In 2014, he signed the infamous “appeal of artists of the Russian Federation in support of the policies of Russian President Vladimir Putin in Ukraine and Crimea.” He has repeatedly spoken out in support of the so-called Novorossiya, DPR, and LPR. In 2018, he became Putin's confidant in the presidential election.

Of the many Russian actors, he most actively supported the armed intervention of Russia in Ukraine. On October 30, 2014, the Novorossiya TV Youtube channel published a video of “Porechenkov at the Donetsk airport.” In the video, the actor in a protective helmet with the inscription “PRESS” and the bulletproof vest of the Rossiya-1 TV channel fires a heavy machine gun at the positions of the Ukrainian military. In an interview with the Russian television channel, he said that the video was staged, and the cartridges were blank. However, the experts later refuted the statement about the staged video and blanks. The artist’s behavior caused a criminal case against him in Ukraine for participating in illegal armed groups. The Security Service of Ukraine stated that there was evidence that Porechenkov had a “hunt” with firearms for civilians in Donetsk. Porechenkov was also blacklisted by the Security Service of Ukraine and the State Agency for the Cinema of Ukraine. All 69 films in which Porechenkov appeared at that time were banned on Ukrainian television. Latvia also declared Porechenkov persona non grata. As a consolation, the actor received the title of “People’s Artist of the DPR.”

In January 2015, Porechenkov, along with Putin’s “favorite biker,” Alexander Zaldostanov, initiated the Anti-Maidan movement. This movement opposes the change of power in Russia, opposition activists and favors strengthening the “power vertical.” Participants in the movement have been repeatedly accused of committing provocations against opposition activists and politicians. In 2016, the movement initiated the educational program “Scenarios for the Future of Russia,” created with the RUDN University. Under the guise of scientific and educational lectures “on countering destructive political forces,” representatives of the movement and the university evaluated the “protest potential” of students and teachers during their visits to several dozen Moscow and regional universities. Based on the results of the study, they compiled reports for the government and state security services. Porechenkov sincerely considers the activists of the Russian opposition his enemies: “The headless people who call for the Maidan here are just enemies who want to drown the country in blood.”

In recent years, Porechenkov complains that he is often denied roles because of his stance on Donbas and Crimea, and he started to look for “enemies” inside the Russian cinematography. Given that in Ukraine he can receive up to 15 years in prison, this is only a tiny part of the responsibility that Porechenkov must bear for his public words and actions.