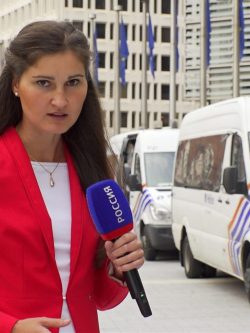 Journalist and war correspondent. An employee of the All-Russian State Television and Radio Broadcasting Company (VGTRK) in Belgium, chief of its office in Brussels. Citizen of Russia and Belgium. She became famous for filming a story about “Alexei Navalny's villa in Germany.” After filming a disinformation story, she received the Golden Pen of Russia award.

Dissemination of misinformation and disinformation, forgery of a story about the stay of the Russian opposition politician Alexei Navalny on treatment in Germany after the Novichok poisoning.

She became famous for her reports from belligerent Syria. She won the Golden Pen journalism award for a report on “Navalny's luxury villa” in Germany, aired on February 7, 2021, on the TV channel Russia-1. That was the house he rented with his family after he was discharged from the hospital, where he received treatment after poisoning by a Novichok chemical agent. The style of the report looked like an allusion to the oppositionist's investigative film about the Putin palace in Gelendzhik.

In her report, Anastasia Popova claimed that living in the house cost Navalny 30,000 euros. However, Leonid Volkov, an associate of Navalny, clarified that the amount was doubled and that these 15 thousand euros for living in the house were paid by businessman Yevgeny Chichvarkin, who sympathizes with Navalny's opposition activities. The viewers of Russia-1 were also informed that Alexei Navalny spent “about a million euros” in Germany, and there was a swimming pool in his house (not in his apartment!). “Navalny himself was accommodated in such a luxury he despised,” said Dmitry Kiselev, the host of the program in which this story was released. In turn, the owner of this house said that the propagandists who filmed the report about Navalny's stay in Germany had misled him. They called themselves tourists but filmed without his permission. He was forced to report to the police.