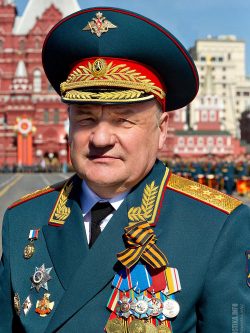 Deputy Minister of Defense of the Russian Federation.

During the year of service in the Ministry of Defense, the media mentioned his name for two reasons. The first time, when the income statements of the Ministry of Emergency Situations for 2012 were published, and Pavel Popov turned out to be the highest-paid rescuer. His annual income was 5.2 million rubles (433 thousand rubles monthly). For the second time, the name of Popov was publicly mentioned by the head of the Ministry of Defense Sergei Shoigu. In July 2013, at the ministry collegium, the minister announced that the colonel-general would set up a national center for state defense - a structure for managing strategic nuclear forces and the daily life of troops. The center would be created in 2014, its main task is to coordinate the actions of all departments in the event of a war. In peacetime, the center will help the military conduct exercises by negotiating with civilian departments.

Participation in the poisoning of opposition politician Alexei Navalny.

On October 15, 2020, European Union introduced sanctions against Pavel Popov in connection with the poisoning of politician Alexei Navalny. The sanctions include a ban on entry into the EU and on financial transactions, as well as an asset freeze.

The reason for the imposition of sanctions against Popov was that in the department he oversees the main department of research and technological support of advanced technologies. The department is responsible for the stockpiles of chemical weapons inherited from the Soviet Union and their safe storage until complete destruction.

“The use of chemical weapons on the territory of the Russian Federation could only be the result of intent or negligence of the Ministry of Defense and its leadership. Pavel Popov, who holds a leading position in the ministry, is responsible for assisting the persons who carried out the poisoning of Alexei Navalny or those involved in it,” the EU Council statement said.

On March 2, 2021, Pavel Popov was also put on the sanctions list by the US Treasury Department in connection with the situation around Alexei Navalny. As stated in the statement of the Ministry of Finance, he is responsible for research activities, which include the supervision and development of the scientific and technical potential of the Russian Ministry of Defense. The imposed sanctions provide for the blocking of all property or property rights in the United States. Also, individuals and legal entities of the United States are prohibited from entering into any transactions with those on the list.