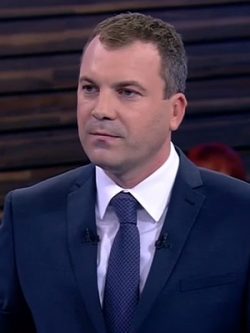 POPOV, Evgeny Georgievich (b. 1978 in Vladivostok) graduated from the Faculty of Journalism of the Far Eastern State University in 2000. While being a student, he began working as a correspondent for local television and radio companies. Since 2000, he has worked in various branches of the All-Russian State Television and Radio Broadcasting Company (VGTRK), starting with the correspondent of the Vesti program in Vladivostok. Later he moved to Moscow. In 2003, he worked in the Ukrainian office of the Rossiya TV channel. In 2005, he was a political observer of the Vesti Nedeli newscast. In 2007, he became a correspondent for the Rossiya TV channel in the U.S. and head of the Vesti New York bureau. From 2014 to 2017, he replaced Dmitry Kiselyov as the host of the Vesti program during his vacations, and also hosted the Special Correspondent talk show instead of Arkady Mamontov. Since September 12, 2016, he has been a co-host of the talk show 60 Minutes with his wife Olga Skabeeva.

Active participation in aggressive state propaganda of the Putin regime, that is, in the creation and dissemination of information that intentionally distorts reality, deceives people and instills an atmosphere of hatred and great-power chauvinism in society in the interests of the current regime.

The basis of the accusation is his active role as a popular presenter and television journalist on state channels for manipulation of public opinion and carrying out propaganda tasks.

Popov is one of the most zealous participants in the information war against Ukraine. He made the first fake stories exposing “Ukrainian Nazism that staged a bloody Maidan” back in 2013. From July 2014 to June 2016, he made various propaganda reports and films for the Special Correspondent program, including “Telemaydan” and “Blockade. Sloviansk,” “Big Brother,” “Citadel 911,” “Kyiv Sich,” etc. In 2016, he shot the film “Media Literacy” on the ideological confrontation between Russia and the West. He is included on the sanctions list by the Ukrainian authorities for actively supporting Russian aggression in the South-East of Ukraine and the annexation of Crimea.

Popov was repeatedly accused of making fake propaganda stories. One of the most resonant was a report published in the Special Correspondent program, where he said that in Norway, allegedly, elementary school children were told about homosexuality. The report was illustrated by footage from a children's room, full of pictures of naked men. The video turned out to be edited with a photo overlay from a computer game.

Popov is the author of pro-Kremlin stories that purposefully shape the image of the Russian liberal opposition as “traitors and enemies of Russia.” For many years, his mentor was another well-known Russian propagandist, General Director of the Russia Today agency Dmitry Kiselev.

Evgeny Popov is the author of the notorious propaganda film “The Browder Effect,” presented as a journalistic investigation, but in fact was a crude fake, designed to prove the cunning plans of Western intelligence services against Russia, the performers of which were Alexey Navalny and William Browder.

The peak of Evgeny Popov’s propaganda success was the Sixty Minutes talk show with Olga Skabeeva, which exceeded the ratings of their older and more experienced fellow propagandists Vladimir Solovyov, Arkady Mamontov, Dmitry Kiselyov, and others. The distinctive style of the program is hosts’ aggressive behavior in the studio and the invitation of experts representing the “enemies of Russia” in an openly caricatured and mocking manner.

Popov himself not only does not refute the propaganda nature of his work but is even proud of his active service to the regime. Testimony of Olga Skabeeva: “You say that propaganda is something unworthy. You’re hinting at an old-time accusation that our program is propaganda and pro-Kremlin? Well, if you think that in response to the insults of our country live by Nikita Isaev or Leonid Gozman, they should not receive comments from other experts or presenters, then we don’t think so. And in this sense - yes, we are a propaganda program. We believe that it is important to somehow protect the government’s point of view, so we chose this place of work, VGTRK.”

Indirect evidence of Popov’s complicity in the crimes of the Putin regime is the regular confirmation of the effectiveness of the work as a state propagandist by receiving ranks and prizes (together with Skabeeva), including The Golden Pen of Russia (2017) and TEFI (2017, 2018).