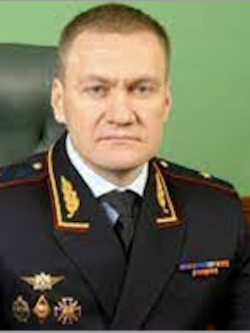 Head of the Main Directorate of the Ministry of Internal Affairs of Russia for St. Petersburg and the Leningrad Region.

Roman Plugin was born in Stavropol on March 10, 1975. He graduated from the Ryazan Institute of Law and Economics of the Ministry of Internal Affairs of Russia in 1996. Besides, in 2010 he received an additional degree at the Russian Academy of Public Administration under the President of Russia.

Plugin began his service in the internal affairs bodies as a detective of the criminal investigation department of the ROVD (Police) of the Oktyabrsky District of the city of Ryazan. It is noteworthy that during his work there in 1999, it was the ROVD of Oktyabrsky District of Ryazan that investigated the allegedly “educational” mining of a residential building by the FSB, notoriously known as the “Ryazan sugar” incident. It is possible that it was precisely this circumstance, or rather his behavior under these conditions, that became the starting point for a further successful career in Putin's system of power. In 2001, he was appointed deputy head of the interdistrict department for economic crimes at the Internal Affairs Directorate of the Murmansk region.

In February 2019, Major General Roman Yuryevich Plugin was appointed head of the Main Directorate of the Ministry of Internal Affairs for St. Petersburg and the Leningrad Region.

Corruption and abuse of office.

Having come to the leadership of the Main Directorate of the Ministry of Internal Affairs for St. Petersburg and the Leningrad Region in February 2019, local employees quickly nicknamed Roman Plugin “Roman from Moscow with the implication that he is an appointee and temporary manager. In Moscow, he was considered a man of Sergei Sobyanin's team, close to Vladimir Kolokoltsev. Plugin is also called the probable successor to the head of the Ministry of Internal Affairs of the Russian Federation Vladimir Kolokoltsev.

After the appointment of Plugin as the head of the Internal Affairs Directorate for the Southern Administrative District, he presumably got control over all local businesses, including the Moscow-Lyublino shopping center market and the infamous Sadovod market of the scandalous oligarch God Nisanov.

In Putin’s system, Roman Plugin is called a “cleaner.” In 2013, he headed the Special Investigations Department of the Internal Security Department of the Ministry of Internal Affairs in Moscow. He worked closely with the Main Directorate of Economic Security and Anti-Corruption and its former chief Denis Sugrobov. It is noteworthy that in April 2017, the Moscow City Court sentenced Sugrobov to 22 years of strict regime for creating a criminal community and 14 episodes of abuse of power. While Sugrobov was under investigation, Roman Plugin was transferred to the leadership of the Internal Affairs Directorate of the Southern District of the capital.

The task of Roman Plugin as a “cleaner” is to carry out a purge in the St. Petersburg police department and to get away from the guardianship of brothers-businessmen Yuri and Mikhail Kovalchuk as much as possible, controlling the business interests of officials and criminal communities.

In the northern capital, the locals disliked him. As soon as Plugin arrived, he immediately began to “push aside” possible competitors among colleagues in the leadership of the agency. By the summer of 2019, generals Rogovoy, Vlasov, Abakumov, and then the head of the Department of Economic Security and Anti-Corruption (UBEP) Aleksey Brilliantov, were dismissed from the St. Petersburg Main Directorate. The latter was considered the main threat of corrupt officials and proved to be good in this post. Such principled people were not needed in Plugin's team.

As soon as the president promoted Roman Plugin in the ranks, the head of the St. Petersburg State Investigation Department, Antropov, wrote a letter of resignation. Most likely, his place was also vacated for Plugin's people. People started talking about the “raider seizure” of the St. Petersburg Interior Ministry by Kolokoltsev’s Moscow “comrade”: Plugin not only fired everyone but also reserved dozens of service apartments for the bosses whom he was going to bring from Moscow in order to form and ensure a system of personal power.

Soon Roman Plugin legalized “officer’s slavery.” This is a document dated August 2019, according to which employees could be forced to report on their movements outside of working hours. Scans of the corresponding document appeared on the Police Ombudsman Telegram channel. Later, other documents appeared on the network, where Plugin was not shy in his expressions, demanding arrests.

With the arrival of Plugin as head of the Main Directorate of the Ministry of Internal Affairs in St. Petersburg, the city has become one of the leaders in the growth of crime in the country. In the northern capital, there were 6 thousand more of them in 2020 than the year before.