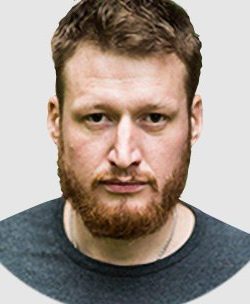 Russian propagandist. He became widely known after the Russian attack on Ukraine on February 24, 2022. He repeatedly spread fakes, including about NATO’s “biological laboratories” on the territory of Ukraine, about the participation of ISIS militants on the side of the Armed Forces of Ukraine, and about the use of phosphorus ammunition by Ukrainian troops. In March 2022, the propagandist's Youtube channel was blocked and then deleted for violating the rules of the site. As of the end of November, more than 1.3 million people subscribed to his WarGonzo Telegram channel (linked by a number of experts with the Russian special services).

Pegov was born in Smolensk on September 9, 1985 and graduated from the Faculty of Philology of the Smolensk State University. At first, Pegov worked as a TV journalist for the All-Russian State Television and Radio Broadcasting Company in Smolensk from 2006 to 2008. In 2008, during the Russian aggression against Georgia, he was sent to occupied Abkhazia to work on a local TV channel. Since 2013, the journalist has worked as a special correspondent for the LIFE.ru website, owned by Aram Gabrelyanov's News Media holding. The project positioned itself as “anti-corruption”, published “compromising evidence” on the Ministry of Internal Affairs, governors, ministers. In 2017, the site and the channel of the same name were closed (at the same time, from the point of view of many experts, Pegov retained his affiliation with Gabrelyanov). This event was associated with the resignation of the first deputy head of the presidential administration, Vyacheslav Volodin, with whom Gabrelyanov was on friendly terms. In 2019, Pegov created the WarGonzo YouTube channel, which specialized in covering “hot spots” (from a pro-Kremlin perspective).

Even before the war, Pegov was engaged in propaganda of the ideology of the so-called “Russian world” (in particular, in 2019 he released his own “documentary film” about the leader of the so-called “DPR” A. Zakharchenko called “His Stronghold”; after that, the film “Callsign “Donetsk”. History of the Debaltsevo Cauldron”), and with the start of a full-scale invasion in February 2022, became one of the “stars"” of Putin's propaganda of the “voenkor” (“war correspondents”) format.

In March 2022, Ukraine blocked the WarGonzo YouTube channel due to the spread of misinformation. In May, YouTube removed the WarGonzo channel from its website, citing a violation of its policies.

In September 2022, Pegov was arrested (for drunken threats to the hotel administrator), later released. The American Institute for the Study of War saw this as a “campaign” by the Russian government against the so-called “war correspondents”, who gained (possibly too much for the Kremlin) media weight.

In October 2022, Semyon Pegov, while in the combat zone along with the illegal armed formation “Somalia”, was blown up by a “petal” mine and was wounded in the leg.

According to the SBU and the administration of the Ukrainian website Myrotvorets, Pegov also supervises the GRU project called “Free City of Odessa”, “aimed at implementing a number of provocations and information sabotage in the Odessa region, which would demonstrate the presence of some kind of “underground and reactive anti-Ukrainian sentiments of the population in the region”.

In 2014, Pegov was awarded the medal of the Order of Merit for the Fatherland “for objective coverage of events in Crimea”. In November 2022, Putin awarded Pegov, founder of WarGonzo, with the Order of Courage “for courage and selflessness.”

Pegov is known for friendly relations with the leaders of the so-called "People's Republics of Donbass”, in particular, from those who are still alive, with Denis Pushilin. In addition, such well-known supporters of the Kremlin's aggressive policy as Eduard Limonov and Zakhar Prilepin spoke positively about him.

According to the available information, Pegov is married to photographer Victoria Oduvan, they have a young son, while he “tries to carefully hide his personal life so as not to endanger loved ones because of his activities.”

In addition to Ukraine, Pegov tried to conduct his propaganda activities in other states of the post-Soviet space, most often coming into conflict with local authorities:

• In August 2020, Belarusian police detained Semyon Pegov during a protest rally of supporters of presidential candidate Svetlana Tikhanovskaya in Minsk. But a day later, the journalist was released at the request of the Russian embassy in Belarus, which was joined by Vladimir Solovyov, Roman Babayan and Margarita Simonyan.

The following are specific examples of the disinformation and propaganda activities of Semyon Pegov shortly before the Russian attack on Ukraine and after the start of the war:

In January 2022, Pegov’s book “Me and Red Separ” was published in honor of the DPR militant Arsen “Motorola” Pavlov, who was killed by the SBU in October 2016.

In January 2022, Pegov spread a false message on his WarGonzo Telegram channel, in which he claimed that “Ukrainian authorities are arming territorial defense units to be sent to Donbass to exterminate civilians.” Most of the Russian media subsequently published his message.

On February 18, 2022, he published a video of an alleged attack by Ukrainian security services on one of the leaders of the pro-Russian “DPR” terrorists in Donetsk using a decoy car. Later, news of this attack was used as one of the reasons for Russia's military invasion of Ukraine.

In April 2022, Pegov posted on his WarGonzo Telegram channel photographs of people mobilized into the Russian army from the occupied territories of Ukraine, whom Russia armed with weapons from the Second World War. At the same time, he claimed that these weapons would now be used against the “new Nazis”, whom he considers to be Ukrainians.

In April 2022, Semyon Pegov distributed photos of dead Ukrainian soldiers on his Telegram channel with the message that the Russian military had destroyed the saboteurs of the Azov regiment. Subsequently, experts, after analyzing the photographs, came to the conclusion that the Ukrainian military were shot in the head, and the photographs were used for the information war against Ukraine.

In May 2022, he published a fake video about the alleged discovery of a secret biological laboratory in Mariupol, where NATO conducted bacteriological research, this fake was later debunked by the StopFake team.

It must be said that Pegov’s approach to the production of propaganda content can be called more than “frank”, even bordering on cynical: for example, in the spring of 2022, during the filming of another story about “tense battles in the air”, Pegov did not even bother to cut out a moment in the video file where he gives the go-ahead to the anti-aircraft installation so that it starts to shoot indicatively.

In July 2022, Pegov stated on one of the central Russian channels that the governments of Turkey and the United States are supplying ISIS fighters to Ukraine, allegedly involved in many local conflicts in Libya, Syria and Karabakh. At the same time, Pegov swore that he saw the flag of the Al-Qaeda terrorist group next to the flags of the Azov regiment in Mariupol.

Also in July 2022, Semyon Pegov published a false video in which he claimed that the Ukrainian army was using internationally prohibited methods of warfare and shelling territories with phosphorus munitions.

• After Pegov traveled to the Nagorno-Karabakh conflict zone in the fall of 2020 to cover the conflict (from the pro-separatist side), the Prosecutor General’s Office of Azerbaijan opened a criminal case against him in connection with his “calls to violate the territorial integrity of the country”, as well as in illegal entry into the territory of the state.

• In December 2021, Semyon Pegov was detained by Moldovan special services at the Chisinau airport during a flight to Moscow and released after a search and interrogation.

Propaganda of aggressive and predatory war.

The propaganda activities of Semyon Pegov contradict both international law (in particular, Article 20 of the International Covenant on Civil and Political Rights of 1966), and, at a minimum, the criminal law of the Russian Federation (Article 354 of the Criminal Code of the Russian Federation) and Ukraine (Art. 436 of the Criminal Code of Ukraine), and must receive a proper official legal assessment, with the ensuing consequences for this person.

In addition, Pegov is a participant in the open military invasion of Ukraine on February 24, 2022 and a direct accomplice in war crimes committed by the Russian army (see, in particular, the above-mentioned incident with the execution of Ukrainian soldiers in April 2022).

‘Red separ’. The book about Russian terrorist ‘Motorola’ was issued in ‘DPR’