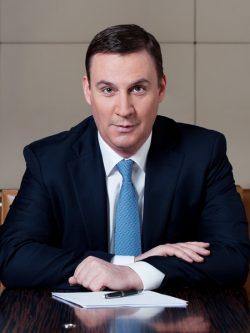 The eldest son of Nikolai Patrushev, former FSB Director and current Secretary of the Russian Security Council. Minister of Agriculture of the Russian Federation since 2018.

PATRUSHEV, Dmitry Nikolayevich (b. 1977 in Leningrad) received a diploma from the State University of Management in 1999 when his father was appointed director of the FSB. Although, there is no information about his studies there. In 2004, he received a diploma from the Diplomatic Academy of the Russian Ministry of Foreign Affairs, and in 2006, he graduated from the FSB Academy.

In 2003, Dmitry Patrushev was hired by VTB Bank, and before that, he had managed to work at the Ministry of Transport. Soon after, Dmitry took over as senior vice president of the bank, where he was responsible for lending to oil companies. In 2010, he was appointed chairman of the board of Rosselkhozbank. In 2016, Dmitry Patrushev joined the Gazprom Board of Directors and became a shareholder of the state gas monopoly. In May 2018, Dmitry Patrushev was appointed Minister of Agriculture of the Russian Federation.

Dmitry Patrushev’s father, Nikolai Patrushev, while being the director of the FSB, liked to propagate the idea of ​​the revival of the so-called “new nobility” in Russia, to which he attributed himself and his offspring. With the example of Dmitry Patrushev, one can observe the formation of the Chekist-feudal system in modern Russia, which, however, has very little in common with the real aristocracy. The children of Putin’s closest associates often hold key positions in state corporations, banks, and offshore companies, but Dmitry Patrushev was the first to receive an official position in the government. Maybe he is an upscale professional? Alas, the facts say otherwise.

Despite the image of the successful young scientist and economist as he received a Ph.D. in economics at the age of 31, the Dissernet project found multiple plagiarisms in his work. However, this did not hinder him: his mentor Vladimir Korelin shortly afterward was appointed head of the Federal Property Management Agency for the Leningrad Region. When a corruption scandal erupted there, he was simply transferred to lead Rosreestr’s department in St. Petersburg.

The state-owned Rosselkhozbank entrusted to Patrushev Jr. got into corruption scandals under his leadership. It had been considered a loss-making bank even before him, and it continued to consume billions of rubles of state injections and suffer losses. So, the size of the loan portfolio exceeded the bank’s capital by 1 trillion rubles, and only in 2014-2016, its losses amounted to 200 billion rubles. This, however, did not prevent Dmitry Patrushev from becoming the winner of the Banker of the Year Award, according to the Association of Russian Banks (ARB) in 2016. Holes in the bank's capital are patched at the expense of the federal budget: in the summer of 2017, the government recapitalized it by 25 billion rubles, and this amount was simply added to the authorized capital. However, it is difficult to find out the true state of affairs in the bank with the departure of Patrushev since the FSB classified information about bad loans.

The bank issued loans to the companies of Maxim Khromtsov, the owner of Misam Investments. The company was featured in the Panama dossier, and in 2012, Nikolai Patrushev, father of the new minister, sold his share in it to Khromtsov. Moreover, Alexey Patrushev, Dmitry’s younger brother, was also a shareholder of the company.

According to the audit of the Accounts Chamber, a bank created to support the agro-industrial complex issued loans to purchase elite housing and cars, including to its employees. Bank managers in the Krasnodar Territory, Rostov Region, Lipetsk, Vladimir, and Yaroslavl, were accused of fraud and embezzlement of funds. According to economist Tatyana Kulikova, “Whether it is a question of inefficiency or corruption, the money that the state allocates to support agriculture is lost. They do not reach many farmers. The selection of recipients is carried out on non-obvious grounds.” However, considerable amounts of money reach the bank’s board members, 265 million rubles per 11 people a year. Patrushev Jr., besides, received substantial income from shares and a position in Gazprom. In 2017, he received over 25 million rubles.

The post of Minister of Agriculture is not as insignificant as it might seem at first glance. In the context of the sanctions war, Russian agriculture is one of the least affected sectors of the economy, and global food demand is growing. The “new nobleman” Patrushev Jr. got a comfortable platform. However, given his dubious successes with the Rosselkhozbank management, the prospects for the development of the agro-industrial complex look vague. The very appointment of the son of one of Putin’s closest associates to the government suggests that the ruling clan intends to retain power as a guarantee of its security and impunity for as long as possible. The concentration of power in the hands of a narrow group of people, their inheritance and the priority of loyalty over professionalism leads to a loss of feedback from society, to the withering away of ways to adequately respond to current challenges. It won’t last long. We would like the destruction of neofeudalism and the transition to a modern democratic republic in Russia to be as painless and as irrevocable as possible.