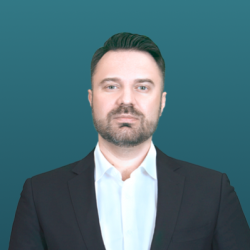 OSTASHKO, Ruslan (b. 1979 in Donetsk) grew up in Ukrainian Sevastopol and moved to Moscow in 1996. In 2003, he graduated from the Moscow Border Institute of the FSB with a degree in law. Since 2005, he has been heading the OST Media company, which initially created websites, did advertising on the Internet, and organized celebrations.

In 2012, during a surge of protest activity after the so-called Medvedev-Putin “castling” and rigged elections, the Presidential Administration took care of monitoring and regulating the Internet, which had previously remained free from government interference and censorship. That year, Ostashko founded a “Regional public organization for the development of civil society “I am a citizen,” which analyzed and monitored public opinion on the Internet with government grants.

In 2014, Ruslan Ostashko founded the “patriotic” Internet portal PolitRussia. Since 2016, he has been an expert at the Internet Development Institute, created on the initiative of Putin and led by the adviser to the president German Klimenko. In 2016, he unsuccessfully participated in the primaries of the ruling United Russia party in the annexed Sevastopol on the eve of the State Duma elections.

Like many other notorious propagandists, a native of Donbas and Sevastopol, Ruslan Ostashko appeared in public in 2014, after an illegal annexation of Crimea and Russian armed aggression in Ukraine. His Internet portal PolitRussia was full of anti-opposition posters and hundreds of pseudo-journalistic “investigations” about Putin’s “smart moves,” “corruption” of the opposition, “Western conspiracy” against Russia and “Nazis in Ukraine.” Unlike some other propagandists, Ostashko appeals to a less educated and less critical audience with his clumsy-style propaganda.

However, the Putin regime allocates significant amounts of money even for this kind of propaganda. According to the leaked files of the Young Guard of United Russia, Ostashko’s organization “I am a citizen” was actively engaged in Kremlin-sponsored propaganda. The organization was registered at the mass registration address (the official criterion of one-day firms) along with Ostashko's other company, OST Media. As follows from the organization report dated April 7, 2014, they mentioned among their accomplishments slandering the “fifth column” (Navalny and Shevchuk), covering “correctly” the investigations against Shenderovich and Vasiliev, supporting the bill on equating bloggers with media outlets, and bullying the victims of the politically motivated Bolotnaya Square case. All this activity was carried out through the OST Media company. An analysis of the public procurement site showed that the federal budget funds the activities of OST Media. A company with a registered capital of 10 thousand rubles suddenly won government contracts totaling almost 100 million rubles.

Among the contracts, are, in particular, “services for data transfer and information support of users based on databases and information and computer networks” for 5 million rubles. Ostashko received 25 million rubles from the Central Election Commission for the so-called “support of the document management subsystem.” It is noteworthy that among the contracts of OST Media there was a cultural exchange with the United States, for which the Ministry of Culture allocated over 9 million rubles seven months after the event itself.

As it turned out from the correspondence of the deputy head of the internal policy department of the Presidential Administration Timur Prokopenko in 2015, Ostashko is in close contact with the agency. According to it, the key focus of Ostashko’s activities are provocations, fake bloggers, and the promotion of the topics, which may discredit opposition leaders. For example, it was he, who at the request of the Presidential Administration, promoted the fake story “Navalny killed the moose.”

One can only guess what amounts Ruslan Ostashko continues to receive. He publishes propaganda videos on his website almost daily, and he tries to attract attention by an appearance on the air of federal talk shows as an “expert.” Other propaganda online media often relay Ostashko’s comments, inflating his image as an “analyst” and obscuring the opportunity to get an objective picture of social and political events in Runet by the disinformation noise.