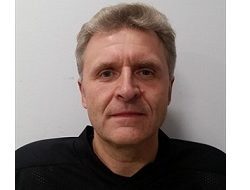 MYACHIN, Viktor Yevgenyevich (b. 1961 in Leningrad) was a graduate and employee of the Ioffe Physical-Technical Institute of the Russian Academy of Sciences, where he worked till 1992. From May 1992 to June 1996, he was successively the head of the department, executive director, and vice president of AOZT Center for Advanced Technologies and Developments. Since November 1993, he was also the General Director of the AOZT Agency for Technical Development (APR). In 1994, AOZT ATR had 11.13% in the authorized capital of the Rossiya Bank. By 1995, he was already a shareholder in Petersburg companies: AOZT Semiconductor Devices (18%), Temp OJSC (2.20%), Stream Corporation CJSC (3%), Rossiya Bank (25.392%).

Currently (2020), Myachin owns the territory of the Nevsky Plant, intended for commercial development, a business center on Medikov Avenue in St. Petersburg, and the Andersen Hotel hotel on Chapygina Street together with another shareholder of Rossiya Bank, Evgeny Malov. According to Finance magazine, Viktor Myachin’s fortune today is estimated at $60 million.

Participating in the creation of the financial base of the Putin regime, illegal enrichment.

Viktor Myachin, along with other co-founders of the Ozero dacha cooperative, who were at the founding of the welfare of the Putin clan and subsequently took control of the most important assets in the country through the Rossiya Bank headed by Myachin.

After the failure of the August coup in 1991, the Communist Party of the Soviet Union (CPSU) was banned in the USSR. Accordingly, it lost its assets, including the Rossiya Bank, which belonged to the Leningrad branch of the CPSU. The bank’s activity was suspended and its assets were frozen. In September 1991, the head of the Petersburg government, Anatoly Sobchak, issued an order to reform the bank Namely, it had to pick up new founders and create the Stabilization Fund for the Economy of St. Petersburg and the Leningrad Region on its basis. Putin, the deputy of Sobchak and the head of the Committee on External Relations of the city, picked up that task. The bank with a license and the party’s money was a tidbit. By that time, a group of employees of the Physical-Technical Institute had created a few companies involved in the resale of foreign equipment, and actively interacted with the Committee on Foreign Relations. Thus, Putin asked them to buy the bank. By the end of 1991, Yakunin, Kovalchuk, Fursenko brothers and Myachin became the new owners of Rossiya Bank. Since then, this bank has become their and Putin's common wallet.

After Putin came to power, the Rossiya Bank took control over huge assets, which became the financial base of the regime and a tool to control a wide range of industries. Currently, the Rossiya Bank controls assets in various sectors of the economy. Through a 100% subsidiary, IC Abros LLC, it owns a 51% stake in one of the largest Russian insurance companies Sogaz, a 100% share in the Zest leasing group of companies, a 27.6% share in the National Media Group, which owns Ren TV, Fifth TV Channel, Channel One, Izvestia newspaper, and many other media. Through Sogaz, the bank owns a 38.3% stake in the Leader CJSC company, which manages the Gazfond pension fund. On March 20, 2014, the United States imposed sanctions against the bank due to Russia’s illegal annexation of Crimea and the Kremlin-provoked conflict in the east of Ukraine. According to the United States, the bank provides material support to Russian government officials and is controlled by members of the closest circle of Russian President Putin, which also includes Viktor Myachin.