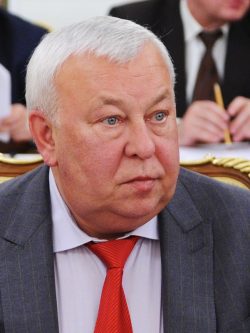 Director of the Federal Protection Service (2000 – 2016), Chairman of the Board of Zarubezhneft

MUROV, Yevgeny Alexeyevich (b. 1945) graduated from the Leningrad Technological Institute of the Pulp and Paper Industry and the Institute of the KGB of the USSR. Since 1971, he served in the KGB. In 1974, he was transferred to the First Main Directorate of the KGB of the USSR (foreign intelligence). In 1992-1997, he served as the head of several divisions of the Ministry of Security / the Federal Counterintelligence Service / the Federal Security Service (FSB) of the Russian Federation in St. Petersburg. In 1997–1998, he was deputy head of the Directorate of the Federal Security Service of Russia for St. Petersburg and the Leningrad Region. Between 1998–2000, he was the First Deputy Head of the Department of Economic Security of the FSB of Russia. In 2000–2016, he headed the Federal Protection Service (FSO) of the Russian Federation. In 2016, he was dismissed as director of the FSO and was elected Chairman of the board Zarubezhneft oil exporter.

Complicity in the formation of an authoritarian Putin’s regime, the direct implementation of the criminal policy of the Russian leadership, as well as abuse of power, corruption, and the abuse of office.

For many years, Murov has been a close associate of President Putin. According to the source of Kommersant, back in 1997, he met the then-director and deputy director of the FSB, Vladimir Putin and Nikolai Patrushev, and they “developed a confidential contact.”

He officially headed the FSO on May 18, 2000, 11 days after the inauguration of President Vladimir Putin. According to some reports, he had been leading it unofficially since 1998. Having headed the service in the rank of major general, four years later he was promoted to an army general, which became the highest military rank of the head of the protection service for all Soviet and post-Soviet times.

Under Murov, the FSO turned into one of the most influential and closed security services of Russia, which, protecting the highest officials of the state, received almost unlimited powers and ran huge funds from the closed part of the state budget. The media called phenomenal memory and extreme rigidity as the main features of Murov.

While in the civil service, Murov did not directly engage in business, at least legally, but immediately after his resignation he took a leading position in the Zarubezhneft company. His son Andrei made a career as a top manager in major companies in the transport and energy sectors, while his name has repeatedly appeared in scandals and investigations of major financial frauds, including the illegal cashing out of billions of dollars.

In 2004-2005, a few media outlets published articles stating that under Murov the FSO became the owner of the trademark “official supplier of the Kremlin” and leased it to businessmen through a certain “Guild of Suppliers of the Kremlin.” According to journalists, a certificate of an official supplier costs 2.25 million rubles, and a regular supplier – 1.5 million.

In 2017, Sobesednik published the results of an investigation of how the family of the ex-head of the FSO obtained property in billions of rubles with an official income of ten million a year, noting that Murov’s spouse “suddenly became one of the richest women in the country, having bought several large companies at once. Over the past few years, the woman has lived on a modest state pension. And the fact that her husband Yevgeny Murov headed the Federal Protection Service until last year, generously distributing state contracts, is probably a coincidence.” According to the publication, the Murov family obtained the assets of the shadow billionaire smuggler Dmitry Mikhalchenko.

Meduza, citing RBC and The New Times, reported that Mikhalchenko and his partner Nikolai Negodov have a Forum company, which includes BaltStroy, which received favorable construction contracts from the FSO commercial company due to the connections between Negrodov and Murov, the former colleagues from the St. Petersburg Federal Security Service.

Indirect evidence of Murov’s complicity in the activities of the criminal regime is his receipt of the highest state awards, including the orders For Military Merit and For Merit to the Fatherland of 4th and 3rd degrees, medals of the Order For Merit to the Fatherland of the 2nd degree, as well as numerous medals of law enforcement agencies, the badge of the Honorary State Security Officer and gratitudes from the President of the Russian Federation.