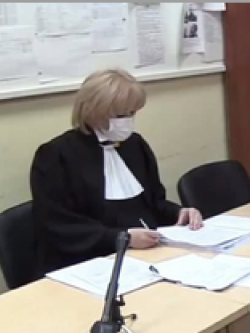 Judge of the Moscow Regional Court

In 2017, Elena Morozova fined Andrey Bazhutin, leader of the Association of Carriers of Russia, for 30 thousand rubles for organizing and holding an unauthorized meeting. The court found several truckers guilty of disobeying a police officer and violating the rules for holding a rally against the Platon payment system.

She became widely known for participating in a demonstratively illegal exit court session, held in the 2nd department of the Ministry of Internal Affairs in Khimki, and arresting opposition leader Alexei Navalny after his return from treatment in Germany.

Carrying out political repression, destruction of the constitutional norms of law in Russia.

On January 17, 2021, Russian opposition leader Alexei Navalny returned to Moscow after treatment in Germany, upon arrival he was detained at Sheremetyevo airport and taken to the police department in Khimki. The next morning, January 18, at the police station, where Navalny was taken the day before, a hearing was held under the chairmanship of Judge Elena Morozova, as a result of which the politician was illegally arrested for 30 days. For fifteen hours after the arrest, until the court session, lawyers were not allowed to see the politician. The lawyer of the politician Olga Mikhailova and Alexei Navalny were notified about the trial a few minutes before its start.

The formal reason for the arrest of the politician was the alleged request of the Federal Penitentiary Service to change the measure of restraint for Alexei Navalny from a suspended sentence to a real imprisonment in the Ive Rocher case, in which the politician was sentenced to 3.5 years conditionally. Navalny was accused of not being registered with the federal penitentiary system, including during the period when he was poisoned by the FSB officers with the Novichok chemical warfare agent, and then underwent treatment and rehabilitation at the German Charite clinic. Despite this, the issue of taking Navalny into custody for 30 days was considered by the court at the request of the head of the Khimki police department No. 2, who had no procedural relation to issues related to the conditional conviction of the politician, this issue is exclusively within the competence of the Federal Penitentiary Service of Russia. According to the legislation of the Russian Federation, a politician could be detained by the police for no more than 48 hours pending clarification of the circumstances. This fact, the absurdity and impossibility of holding such a meeting, in principle, in accordance with the Criminal Procedure Code of the Russian Federation, the court did not assess, the trial took place despite gross violations of the law.

During the trial, Alexei Navalny filed a petition for the admission of at least two journalists from the Dozhd and Mediazona editions. Judge Elena Morozova immediately refused to satisfy the petition, since “there are accredited companies performing video filming at the court session.” In fact, only representatives of the pro-government media were present in the courtroom.

Judge Morozova allotted only 30 minutes for Alexey Navalny and his lawyers to familiarize themselves with the case materials. The court refused to provide confidential consultations to the politician's lawyers; the communication took place in the presence of police officers with the turned on chest video recorders. During the hearing, Navalny's lawyers Olga Mikhailova and Vadim Kobzev drew the court's attention to a gross procedural violation; the case file did not contain a document on the appointment of the court session. Judge Morozova supported the representatives of the prosecutor's office and the Ministry of Internal Affairs and refused to provide the defense with the document.

After the arrest, during a personal search, Navalny's passport was confiscated. Lawyer Kobzev drew the court's attention to the fact that a copy of the passport is in the case file, and the passport was not listed in the protocol of seizure. Kobzev applied for the return of the passport to his client or his lawyers. Judge Morozova rejected the request.

The lawyer Mikhailov petitioned for the admission of Navalny's press secretary Kira Yarmysh to the courtroom. Judge Morozova rejected the petition, agreeing with the arguments of the representative of the Ministry of Internal Affairs that “the maximum number of people in this room has already been reached” and referred to “measures taken to ensure sanitary standards.” Navalny asked to let Ilya Pakhomov and Ruslan Shaveddinov from FBK go to court. The judge immediately refused.

During the hearing, Judge Elena Morozova fully accepted the position of the prosecution, the prosecutor's office and the Ministry of Internal Affairs, rejected all the arguments of the defense and decided to take Alexey Navalny into custody for 30 days.

Alexey Navalny's defenders, in a complaint against the decision to detain him, pointed to a number of inconsistencies with the current legislation. This document is available at the disposal of Meduza webzine. The lawyers, in particular, pointed out that in the Criminal Procedure Code there is no procedure for “extending the detention period to 30 days,” as the court ruled, but only “detention for a period of no more than 30 days”. At the same time, formally, the head of the Khimki Ministry of Internal Affairs, on whose submission the issue was considered, asked to take Navalny into custody, and not to extend his detention (the lawyers also believe that, in accordance with the Criminal Procedure Code, he had no right to initiate this anyway).

According to the lawyers, holding a meeting in the Khimki police department, which is directly subordinate to the head of the Ministry of Internal Affairs who applied to the court, violates the principle of independence of the parties. Navalny himself, the defenders note, was deprived of the opportunity to communicate with lawyers before the court. The lawyers also said that the Federal Penitentiary Service, which stated that Navalny was hiding from the control of the executive inspection, was informed about the address of his residence in Berlin, but did not try to verify this - that is, the politician was, according to the defense, declared wanted illegally. Besides, the lawyers believe that Navalny was placed in a pre-trial detention center without taking into account a number of circumstances related to his poisoning, which poses a direct threat to his life and health.