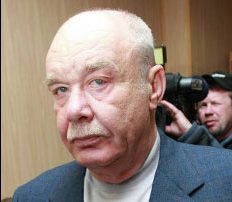 MOGILEVICH, Semion Yudkovich (b. 1946) is a Russian-Ukrainian mafia boss, considered to be the “boss of bosses” of most Russian Mafia syndicates in the world. Born in Kyiv, he graduated from Lviv University with a degree in economics, at the same time he was engaged in underground currency and gold exchange. He was convicted twice for violating the rules of currency exchange transactions (1973) and fraud (1977). After his release, Mogilevich created a “train station” criminal group in Kyiv, established contacts with the Lyubertsy and Solntsevo Moscow gangs. In the mid-80s, Mogilevich moved to Moscow. In the perestroika years, he created the Arbat International company, which was engaged in the shipping and export business.

In 1990, Mogilevich moved to Budapest, where he founded the foreign branch of the Solntsevo gang. Mogilevich created two large companies in the USA, YBM Magenex International, and FNJ Trade Management. FBI put him on the wanted list for alleged fraud with shares of YBM Magenex International, committed in 1993-1998 and costing the company's investors $150 million. He was accused of extortion, securities fraud, electronic communications fraud, mail fraud, money laundering.

Mogilevich was also suspected of reselling the enriched uranium to Osama bin Laden's group. Supposedly, he also sold Iran ground-to-air missiles and armored vehicles in the early 1990s. In July 2005, the then head of the Security Service of Ukraine Oleksandr Turchynov announced that there was “indirect evidence” that Semion Mogilevich controlled Rosukrenergo, the exclusive supplier of Russian gas to Ukraine. Earlier, Mogilevich was also mentioned in the Ukrainian media as the shadow owner of the Hungarian company Eural Trans Gas, a former supplier of Turkmen gas to Ukraine.

January 24, 2008, Mogilevich was arrested in Moscow by the Department of Economic Security of the Ministry of Internal Affairs of Russia on suspicion of complicity in tax evasion. On July 24, 2009, he was released from custody on his recognizance. On April 18, 2011, the investigative unit of the Main Directorate of the Ministry of Internal Affairs for the Central Federal District closed the criminal case against Mogilevich for lack of corpus delicti.

Mogilevich is a citizen of Russia, Ukraine, Israel, and Hungary. He is married and has four children. In recent years, Mogilevich has been living permanently in Russia and Israel. According to some reports, he has up to 15 different passports, but, according to the FBI, he uses a Russian passport. In criminal circles in Russia and abroad, he is known as Seva, Don Simenon and Man With Seven Faces, as well as Palagnyuk, Telesh and Fisherman.

Putin’s arrival at the top of state power allowed Mogilevich to safely take refuge in Russia without fear of persecution and manage his assets from Moscow. As follows from the “Melnychenko tape” - wiretapping in the office of the Ukrainian president Kuchma, conducted in 1998-2000, Putin personally knows Mogilevich. So, on February 8, 2000, Kuchma’s conversation with General Derkach, the head of the Security Service of Ukraine at that time, was recorded. Derkach and Kuchma were discussing some issues that Seva promised Kuchma to solve. In the course of the conversation, it turns out that Derkach recently met with Mogilevich, that Seva had already settled down in Moscow, bought a summer house and had a good personal relationship with Putin’s work in St. Petersburg. The next conversation about Mogilevich took place two days later, on February 10, 2000. The head of the military intelligence of Ukraine, General Smeshko, reported to Kuchma that Mogilevich has been the KGB and SVR (Russia’s Foreign Intelligence Service) agent since the Soviet times.

According to the FBI, Mogilevich controls a “huge international criminal network”. Mogilevich is accused of fraud, extortion, money laundering, forgery, and racketeering. He is also suspected of organizing prostitution and contract killings. He is described by the FBI as “the most dangerous mobster in the world”.

The Most Dangerous Mobster in the World