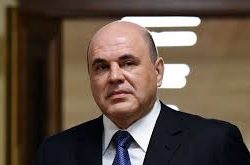 Chairman of the Government of the Russian Federation since January 16, 2020.

MISHUSTIN, Mikhail Vladimirovich (b. 1966) graduated from the Moscow Machine-Tool Institute with a degree in computer-aided design in 1989, and in 1992, he got a post-graduate degree from the same institution. After graduating, Mishustin became a director of a test laboratory and later headed the board of the International Computer Club (ICC), a public non-profit organization.

In 1998, Mishustin joined the civil service as an assistant for information systems for accounting and control over the receipt of tax payments under the head of the State Tax Service of Russia. Then he worked in the rank of Deputy Minister of the Russian Federation for Taxes and Levies, head of the Federal Agency for Cadastre and Real Estate (Rosnedvizhimost since March 2004) as part of the Ministry of Economic Development of Russia, head of the Federal Agency for Management of Special Economic Zones (RusSEZ since December 2006).

In 2008, he voluntarily left the civil service and again went into business - this time in the field of investment. Mishustin worked for 2 years as President of UFG Capital Partners and Managing Partner of UFG Asset Management.

In February 2009, Mishustin joined the personnel reserve of the President of Russia, and in April 2010, he was appointed head of the Federal Tax Service. In 2013, Mikhail Mishustin was appointed supervisor of the Department of Taxes and Taxation at the Financial University under the Government of the Russian Federation. On January 15, 2020, Russian President Vladimir Putin proposed Mikhail Mishustin as Chairman of the Government of the Russian Federation, and on January 16, the State Duma approved the appointment of Mishustin as Prime Minister.

The former main Russian tax collector, who became the prime minister, was involved in a number of corruption scandals. He has been repeatedly accused of creating large-scale schemes for theft of budget funds under the guise of a VAT refund, exactly what Sergey Magnitsky investigated for what he paid for with his life. Back in 2002, Mishustin arranged to receive two World Bank loans for the dubious purchase of computer equipment for 100 and 160 million US dollars. According to media reports, at the same time, he acquired a luxurious house on the Rublevo-Uspensky highway with a large sports complex.

According to the investigation of Alexei Navalny, Mikhail Mishustin owns property worth 2.8 billion rubles. According to Kommersant, Mishustin invested income from his earnings in business in long-term deposits, while RBC, citing UFG partner Polina Gerasimenko, said that Mishustin earned $33.5 million thanks to his participation in a joint business in 2008–2010. It is also known that after leaving the UFG when Mishustin already headed the Federal Tax Service, he continued to receive income from the UFG, which is a violation of the law.

The sister of the prime minister is married to Alexander Udodov, who is the owner of large shopping centers (U Rechnoy, Atlas, and the Terme resort in the Krasnodar Territory), and was previously vice president of the Itera oil and gas company. In February 2020, it became known that Yandex began to remove links about Udodov from its search engine.

A year after Mikhail Mishustin headed the Federal Tax Service, the FSB carried out an operation to investigate the embezzlement of 2 billion rubles under the guise of a VAT refund. RBC and Kommersant reported that the possible organizer of the embezzlement was Udodov and emphasized his relationship with Mishustin. The version of Udodov’s guilt was refuted by the court. Immediately after this decision, Mishustin began to receive a large amount of real estate as a gift from Udodov.