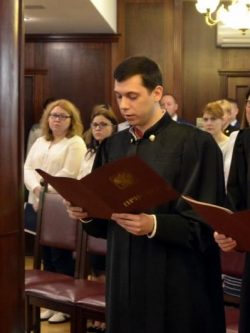 (Proposed for inclusion in the Putin’s List)
Judge of the Tverskoy District Court of Moscow.

MININ, Stanislav Yuryevich was appointed a judge of the Tverskoy District Court of Moscow by the decree of the President of the Russian Federation of July 7, 2018. Prior to that, he worked as a secretary in the Basmanny District Court of Moscow under the notorious judge Natalya Mushnikova, known for a number of high-profile political persecutions.

In the short time that has passed since being appointed judge, the young lawyer Stanislav Minin has already managed to acquire a bad reputation by directly participating in the execution of political repressions against the political opponents of Putin’s regime. Stanislav Minin is one of the main performers of the so-called Moscow Case — criminal and administrative prosecution of participants of peaceful protests against the prohibition of independent candidates from participation in the election to the Moscow City Duma.

On July 30, 2019, Judge Minin sentenced Dmitri Gudkov, an opposition figure and independent candidate for the Moscow City Duma, to 30 days of administrative arrest for “repeated violation of the rules for public assemblies” (article 20.2.8 of the Code of Administrative Offenses): allegedly on July 14, he posted appeals on his Twitter page to go to the Moscow City Electoral Commission and demand registration of independent candidates. The court rejected all petitions of the defense, and also ignored the argument that this tweet was not even written by Gudkov himself.

On the next day, July 31, 2019, Judge Minin imposed a fine of 200 thousand rubles (approx. $3,150) on activist Daniil Latyshev for, again, “repeated violation of the rules for public assemblies”. The activist participated in a demonstration in support of public assemblies on January 30, 2019. The activist stated that the participants of the march walked peacefully along Tverskaya Street, not meeting either police or demands to stop the march along the way. Judge Minin dismissed all the petitions from the defense.

On September 5, 2019, Judge Minin convicted the opposition activist Konstantin Kotov of “repeated violations of the rules for holding rallies” (under Article 212.1 of the Criminal Code — a controversial clause introduced in July 2014 to criminalize repeated violations of the country’s laws regulating public assemblies) and sentenced him to four years of prison. Konstantin Kotov has been actively participating in pickets and demonstrations in support of a number of causes since 2018 and is known as a peaceful protester, whose activism never involved violence. Kotov was detained on more than one occasion, but always for peaceful protests. His first arrest took place during a rally at Moscow State University on March 2, 2019, where he was taken away while giving an interview. Kotov was detained once again on June 12, 2019, during the march in defense of arrested investigative journalist Ivan Golunov on Moscow’s Strastnoy Boulevard. The activist’s third arrest took place on the evening of August 10, 2019. He was detained at Moscow’s Staraya Square, where an unsanctioned protest for fair elections was set to take place. Following this arrest, his apartment was searched without a court order.

“The authorities completely deprived society of the opportunity to influence the situation in the country. There are no independent parties, no fair elections. There is only one way out — going to the streets and trying to shout out our demands there. But even this is not allowed,” Kotov said after his trial. “If legal methods of protest are totally prohibited, sooner or later we won’t be seeing peaceful public protests in the streets, but uprisings from people at their limits… With its actions, the regime is digging its own grave.”

Inside Moscow’s Courtroom Crackdown: The Case of Activist Konstantin Kotov