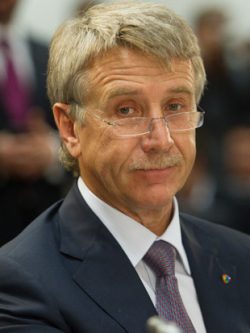 MIKHELSON, Leonid Viktorovich (b. 1955 in Kaspiysk), born into a Jewish family, graduated from the Kuibyshev Civil Engineering Institute with a degree in civil engineering in 1977. After that, he worked as the superintendent of the construction trust in the Khanty-Mansiysk Autonomous Okrug of the Tyumen Region near the city of Surgut at the construction of the first line of the Urengoy-Chelyabinsk gas pipeline.

In 1984, he became the chief engineer of the Ryazantruboprovodstroy trust. In 1987, he headed the Kuibyshevtruboprovodstroy trust. Later in 1991, the trust became the first privatized joint-stock company in the region and changed its name to Samara People's Enterprise Nova. Until 1994, Mikhelson was the managing director of it. In 1994, Nova came under the control of the Novafininvest management company, and Mikhelson became its CEO.

As of 2019, Leonid Mikhelson was the richest Russian with a fortune of $24 billion. Mikhelson is one of many Russian oligarchs named in the Countering America's Adversaries Through Sanctions Act, CAATSA, signed into law by President Donald Trump in 2017.

In 2009, a member of Putin’s inner circle Gennady Timchenko, the well-known head of Gunvor oil trader, became a shareholder of Novatek. In partnership with Timchenko, Mikhelson acquired Sibur, the largest petrochemical holding in Eastern Europe, and a few other enterprises. The purchase of enterprises in partnership with Timchenko was supposedly due to lobbying the interests of Michelson and Timchenko by local authorities. For example, in 2015, the government of Bashkortostan held an auction to buy shares of the only producer of terephthalic acid in Russia, Polyef. The local LLC Rebus was recognized as the initial winner. However, later the government of Bashkiria and Rebus LLC terminated the already concluded contract, and Sibur became the owner of the Polyef assets. The sale of Polyef shares was the responsibility of the Ministry of Land and Property Relations of Bashkiria. Noteworthy, that before the sale of Polyef, the head of Bashkortostan Rustem Khamitov had met with Leonid Mikhelson. There is a lot of information in the media about the talks between the head of Bashkortostan and Mikhelson.

Michelson maintains good relations with other regional leaders. In 2010, 38-year-old Dmitry Kobylkin, who began his career at Purneftegazgeologiya and Khancheyneftegaz (a subsidiary of Novatek), was appointed governor of the Yamal-Nenets Autonomous Okrug. The head of the Yamal-Nenets Autonomous Okrug had been already suspected of loyalty to Mikhelson, and before the gubernatorial election, Kobykin had been called “a nominee from Novatek” in the media. Since then, Novatek has received a regime of special administrative and political favors in the region.