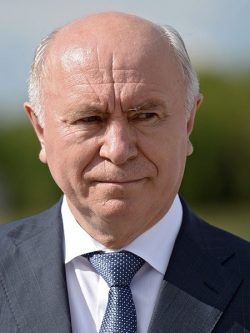 MERKUSHKIN, Nikolai Ivanovich (b. 1951) graduated from the Mordovian State University in 1973. The same year, he started his career as the Communist Party functionary. In October 1990, he ran for president of the Supreme Council of the Mordovian Autonomous Soviet Socialist Republic but lost the election to Nikolai Biryukov. Then he ran for president of the Republic of Mordovia but did not go through the first round of elections. In 1994, he was elected to the State Assembly of the Republic of Mordovia. In January 1995, he was appointed the Chairman of the State Assembly of Mordovia. On September 22, 1995, he was elected to the post of head of the region.

He led the Republic of Mordovia from 1995 to 2012. Under his leadership, the republic turned from a donor region into a subsidized one. Then, he was appointed the governor of the neighboring Samara region. In both regions, his family and friends got involved in corruption scandals. In both regions, Merkushkin “ensured” the United Russia party high election results. In 2011, UR received almost 92% of the vote in Mordovia though the experts claim that the election was rigged.

Merkushkin is famous for his odious statements. He called for “praying for pensions,” since “the country's reserves are running out.” In August 2016, at a meeting with residents of the Komsomolsky district of the city of Togliatti, in response to a complaint by an employee of an AvtoVAZargegat subsidiary about the systematic non-payment of salaries, he said that she would never pay her debts. He argued that opposition activist Alexei Navalny was part of the “Dulles’s plan,” a fictitious US strategy to fight the USSR, and also stated that the US was destroying Russia through school books. After the March 2017 rally against corruption, Merkushkin organized a forum “No to extremism,” where he told students that everything stated in the film of the Anti-Corruption Foundation “He is not Dimon for you” is a lie. According to numerous accounts, participation in the event was compulsory. At the forum, the governor showed a 20-minute propaganda film shot by local television. In it, an opposition rally was compared with the Ukrainian Maidan and conflicts in the Middle East.

In 2017, Merkushkin resigned as governor and became the Special Representative of the President of Russia for Cooperation with the World Congress of Finno-Ugric Peoples

Nikolai Merkushkin is the head of a large corruption clan consisting of his relatives and friends. The family and close friends of the Merkushkins have interests in the construction, fuel, food industry, and in the investment business of Mordovia.

Merkushkin’s elder brother, Alexander Merkushkin, owns several construction and investment companies. In 2018, the branch of the Federal Anti-Monopoly Service of Russia in the Samara region opened a case against three construction companies on suspicion of cartel conspiracy. Antitrust managers believe that Samaratransstroy, Ulyanovsktransstroy, and S.I.T.I. created the appearance of competition by participating in tenders, as a result of which the maximum price of contracts has been reduced by no more than 0.5%. The latter has been associated with Nikolai Merkushkin and regional construction minister Alexei Grishin.

The ex-governor’s younger brother, Ivan Merkushkin, is the CEO of Mordovia Fuel Company, which owns dozens of gas stations in Mordovia, and also holds shares in Mordovpromstroy bank. Merkushkin’s nephew, Sergey Merkushkin, is the First Vice President and member of the Board of Directors of Saranskstroyzakazchik, the construction company in Mordovia, and the owner of several other Mordovian enterprises and shares in banks. Nikolai Merkushkin’s son, Alexei Merkushkin, was appointed Deputy Prime Minister of Mordovia in December 2012. He has been working in the government of Mordovia to this day.

The closest relatives of Merkushkin, as well as representatives of his clan, built a whole village on Rublevskoye Shosse, a prestigious residential area in the western suburbs of Moscow. Their real estate includes several palaces worth millions of dollars, according to the Anti-Corruption Fund.