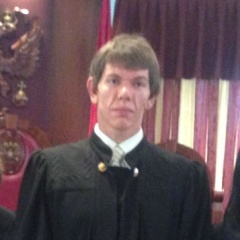 Judge of the Tverskoy District Court of Moscow.

Judge Merkulov has an impressive track record of participation in the persecution of Kremlin’s opponents.

On January 27, 2016, he extended the arrest of Sergei Akhmetov, who was accused of ripping off policeman’s shoulder straps, under Art. 318 part 1 of the Criminal Code of the Russian Federation (violence against a government official), during an opposition rally on Manezhnaya Square, although he was not in Moscow at all that day. Moreover, according to the examination of the Ministry of Internal Affairs, Akhmetov did not look like a person from a photograph from the criminal case. Akhmetov’s case was later dismissed.

On December 7, 2017, he sentenced Dmitry Krepkin, a participant in the Moscow anti-corruption rally on March 26, to one and a half years of a penal colony on charges of assaulting riot police senior sergeant Mikhail Zvonarev. Krepkin, a 33-year-old Muscovite who had worked as an equipment repairman before his arrest, was found guilty of part 1 of Article 318 of the Criminal Code of the Russian Federation (the use of non-dangerous violence against a government official). According to the verdict, he struck Zvonarev a blow to the arm, causing “severe physical pain” to the riot policeman. In reality, however, Krepkin hit the policeman’s rubber club to distract his attention from the detainees. The lawyer of the political prisoner Ilnur Sharapov, speaking in the debate, pointed out procedural violations in the case, and also noted that the “victim” Zvonarev had not received any injuries. Nevertheless, Judge Merkulov considered the guilt of the defendant proven and sentenced him to imprisonment.

Judge Merkulov took part in the Moscow Case, criminal persecution of participants in the opposition rallies against the refusal of the authorities to register independent candidates for running in the elections to the Moscow City Duma. On September 3, 2019, Merkulov sentenced activists Ivan Podkopaev and Danila Beglets to prison terms. Both were accused of using violence against law enforcement officials on July 27 rallies in Moscow. Merkulov sentenced Podkopaev to three years in a penal colony. According to the prosecution, Podkopaev sprayed a chemical substance at the police officers. Two of them allegedly received a chemical eye burn.

Danila Beglets was also accused of a crime under Part 1 of Art. 318 of the Criminal Code of the Russian Federation (the use of non-dangerous violence against a representative of authorities). According to investigators, the protester grabbed the policeman by hand and jerked it, causing physical pain to the police officer.