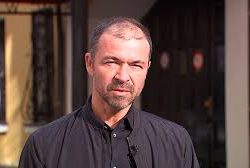 MERCURY, Ilias (b. 1972 in Tashkent) was born in a Greek-Russian-Vietnamese family. His father fled from the Greek military junta but did not stay long in his new homeland, and already in 1973, the family returned to Greece. In September 1991, Ilias Mercury, barely fluent in Russian, returned to Russia, enrolling at Moscow State Medical and Dental University. Due to poor performance, he dropped out. He worked as a bartender and studied at the Moscow International Higher School of Business. At this time, he became close to some influential people who allocated him money to open his restaurant in Moscow downtown in 1999. Over the next six years, he opened a few glamorous restaurants. Since the late 1990s, Mercury got acquainted with the tabloid writer Sergei Minaev, and by the mid-2000s, he decided to become a writer too. In 2007 and 2009, he published two pulp fiction novels.

During the All-Russian protests against the rigged election results in 2011-2012, Mercury took part in provocations against the opposition activists under the alias Dick Riot and attracted the attention of several pro-Kremlin media. In 2014, he worked at the radio station Russian News Service. Since August 2015, he has been collaborating with a notorious neo-Soviet propagandist Dmitry “Goblin” Puchkov and has been active in the pro-Kremlin Antimaidan movement. Since September 2016, he has been an invited expert at the Vladimir Solovyov and Anna Shafran’s Full Contact propaganda show on Vesti FM radio station.

Participating in pro-Kremlin propaganda, provocations against activists of the democratic opposition.

Like many other online propagandists, Ilias Mercury has many dubious gaps in his biography. An adventurer by nature, he organically fit into the aesthetics of petrodollar 2000s with a cult of glamor and a lack of empathy. Friendship with a pro-Kremlin tabloid writer Sergei Minaev predetermined his political stance. Nevertheless, it is difficult to say what prompted the successful restaurateur and writer (according to him) to engage in petty political provocations against the opposition and to turn into one of the freelance propagandists on a contract with the Presidential Administration.

In circles not interested in tabloid literature, he became famous during the mass protests of 2011-2012, when he, came to the opposition rallies in a knitted mask (a parody of the protest punk band Pussy Riot) and tried to provoke a conflict with opposition activists and recorded their reaction on a camera. Later, many other pro-government provocateurs would use such tactics. Having caught publicity, he took part in the pro-Kremlin media project Heroes and got a job on the radio. With the beginning of the Kremlin’s armed aggression against Ukraine, he joined in unleashing anti-Ukrainian hysteria. Since then, he has been an activist of the notorious pro-Kremlin Antimaidan movement, known for attacks on opposition activists.

In 2015, hackers leaked his correspondence with the Deputy Head of the Office of Internal Policy of the Presidential Administration Timur Prokopenko. It followed that he regularly received instructions from the authorities on how to “correctly” respond to particular news stories. For example, how to support amendments to the law on rallies that introduced huge fines for minor violations. He even coordinates his tweets with his curator from the Presidential Administration.

Mercury lost his glamorous gloss from the “fatty 2000s,” and now he teaches Russians to love Putin's government in the guise of the Donetsk insurgent. Under the portraits of Stalin, Putin, and Dzerzhinsky, and with a slight Greek accent, he denounces the Russian opposition and admires the punitive organs of the Russian Federation. Such people as Mercury are in demand by the Kremlin as lightning rods during the ongoing impoverishment of the population and the tightening of the political regime.