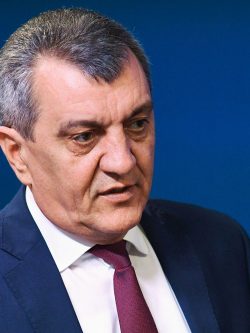 Sergei Ivanovich Menyailo was born on August 22, 1960, in the city of Alagir of the North Ossetian Autonomous Soviet Socialist Republic (now the Republic of North Ossetia - Alania). In 1983, he graduated from the navigational faculty of the Caspian Higher Naval Red Banner School (now the Azerbaijan Higher Naval School), specializing in navigator engineering, in 1995 graduated from the Kuznetsov Naval Academy, then in 2004 - the Military Academy of the General Staff of the Armed Forces of the Russian Federation.

Menyailo is a participant in military conflicts. In 2008, he took part in a naval landing operation conducted by the Russian armed forces in Georgia. He commanded a naval group in the combat area. In 2009, Menyailo was appointed Deputy Commander of the Black Sea Fleet.

In April 2010, Sergei Menyailo was on the list of candidates for the head of North Ossetia, which was proposed to President Dmitry Medvedev by the United Russia party. But he did not become the head at that time, the chair of the head of the republic was then taken by Taimuraz Mamsurov. In 2011, he was dismissed from military service to the reserve.

Besides, Menyailo took part in the military conflict with Ukraine in 2014. He participated in the formation of the so-called self-defense units in Crimea. After the annexation of Crimea and Sevastopol, he headed the state enterprise Crimean seaports, which acquired the property of all the ports in the republic.

Sergei Menyailo began his political career in April 2014, when he was appointed acting governor of Sevastopol. Later, he became a member of the regional headquarters of the All-Russian Popular Front. In September 2014, he took part in the elections to the Legislative Assembly of Sevastopol of the 1st convocation on the list of the Sevastopol regional branch of the United Russia party. He also ran under the second number of the general part of the list after Alexei Chaly. After the elections, he refused the deputy mandate.

In October 2014, Sergei Menyailo was elected governor of Sevastopol: 21 out of 24 deputies voted for him, three ballots were invalidated. On the same day, he took up the duties of the head of the city for five years. At the same time, he headed the government of Sevastopol. In July 2016, Menyailo was relieved of his post as governor and appointed Plenipotentiary of the President of the Russian Federation in the Siberian Federal District and soon became a member of the Security Council of the Russian Federation.

Since July 2018, he has also been a member of the Presidential Council for Strategic Development and National Projects.

Participation in military aggression in Ukraine and Georgia; involvement in the poisoning of opposition politician Alexei Navalny; excess of official powers when he was the governor of the Russia-annexed Sevastopol.

In June 2014, Sergei Menyailo was included in the US sanctions list with the wording “due to the actions that led to a threat to peace, security, stability, sovereignty and territorial integrity of Ukraine.” Besides, in October 2020, he was included in the sanctions list of the European Union in connection with the poisoning of politician Alexei Navalny. The sanctions include a ban on entry into the EU and financial transactions, as well as an asset freeze. Sergei Menyailo was in charge of political activity in the Siberian Federal District when the oppositionist was poisoned there.

While serving as governor of Sevastopol, Sergei Menyailo abused his official powers. Several scandals in the region are associated with his name. One of them is the illegal distribution of land to the Night Wolves motorcycle club. The Legislative Assembly of Sevastopol criticized the decision of Menyailo and the city government to transfer land around Mount Gasfort on lease to bikers from the Night Wolves for the construction of sports and patriotic centers. It was about the transfer of a unique facility with an area of 2.7 sq. km and lakes on this territory. According to the document, this site was allocated for rent for a minimum fee - 0.1% of the cost of 1.4 billion rubles. The price was explained by the fact that the project for the construction of the center for extreme sports, conceived on the site, is “non-commercial” and “socially significant for the development of the city.” Mr. Menyailo explained the transfer of the plot to bikers by the instructions of the president, “which he gave last summer.” The bikers, according to him, have been preparing the project of the center for a year. Menyailo nevertheless gave the land to the bikers on initial terms, promising that they would provide a detailed plan for creating a patriotic center, which would be discussed at public hearings. But in December 2015, the Prosecutor General's Office decided that the land had indeed been leased out with violations.

Besides, Menyailo featured in a scandal with the appointment of a priest as director of the Chersonesos museum. Protests from the scientific community were aroused by the decision of the Governor of Sevastopol, Sergei Menyailo, to appoint Father Sergiy Khalyuta, the Dean of the Sevastopol District of the Ukrainian Orthodox Church of the Moscow Patriarchate, to the post of director of the museum reserve. The decision to appoint a priest as director of the reserve Chersonesos Taurichesky was dissatisfied with both the staff of the reserve and the federal parliamentarians. The Commission of the Russian Federation for UNESCO appealed to the Ministry of Culture and the Administration of the President of the Russian Federation with a “proposal to normalize the situation” around the reserve. Many questions arose about the qualifications of Father Sergiy and the legality of his appointment.

The rule of Menyailo in Sevastopol led to mass rallies against the authorities began in the city in 2015-2016. Initiative groups have collected signatures under the appeal to the president more than once. Activists were dispersed, rallies were not coordinated. An equally important role in the resignation of Sergei Menyailo was played by dissatisfaction with his work on the part of members of the government. In March 2016, federal media reported that the Cabinet of Ministers was concerned about the idea of the Sevastopol governor to transfer the lands of the Baydar Valley to the Stroygazmontazh company of Arkady Rotenberg for the construction of an entertainment complex. In April 2016, Deputy Prime Minister Dmitry Kozak criticized the Sevastopol authorities. He criticized Sergei Menyailo and his team for the failure of the deadlines for the implementation of 19 events within the framework of the federal target program for the socio-economic development of Crimea and Sevastopol.