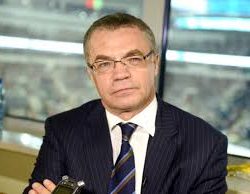 MEDVEDEV, Alexander Ivanovich (b. 1955) graduated from the Bauman Moscow Institute of Physics and Technology in 1978. In 1978 - 1989, he worked in Moscow at the Institute of World Economy and International Relations (IMEMO). In 1989 - 1991. Medvedev was the director of Donau-Bank AG Sovzabranbank (Vienna, Austria), the managing director of a subsidiary of Inter Trade Consult GmbH. The media reported that he and his subordinates were agents of the Soviet KGB in Austria.

In 1991 - 1996, he was the Director of IMAG Investment Management and Advisory Group GmbH (Vienna, Austria). In 1997 - 1998, he served as vice president of East Oil Company (Moscow). In 1998, he once again headed IMAG Investment Management and Advisory Group. Since June 2003, he has been a Member of the Board of Directors of SOGAZ.

In July 2004, he became Member of the Coordinating Council of the Swiss company RosUkrEnergo, a joint venture of Gazprombank and the Austrian Raiffeisen Investment, created to supply Turkmen gas to Ukraine. In 2002 - 2005, he was General Director of Gazexport LLC (now Gazpromexport), a member of the Gazprom Management Committee (Moscow). From April 8, 2005, to February 25, 2019, Alexander Medvedev was Deputy Chairman of the Gazprom Management Committee (retaining the position of Director General of Gazpromexport LLC until June 30, 2014). In April 2009, Alexander Medvedev became the only Russian citizen to be in the TOP-100 of the world's most influential people according to Time magazine. An accompanying article noted that a third of the gas consumed by Europe passed through his company.

Alexander Medvedev, when he was Deputy Chairman of Gazprom and the head of the Gazpromexport, especially from 2006 to 2014, was the main drive belt of the Kremlin policy of “gas blackmail” of Ukraine. In our short review, it is impossible to cover all the details of many years of blackmail, however, these three circumstances deserve the attention:

1) Starting from 1993, the Russian side tried to abolish preferential tariffs for gas supplies to Ukraine for political reasons (for example, speed up the division of the former Soviet Black Sea Fleet on conditions favorable for the Russian Federation). In the same years, such tariffs for Belarus, which unconditionally allied with the Kremlin since 1992, were not questioned.

2) This politically motivated gas blackmail by Russia was intended to undermine Ukraine’s economy as an “unreliable political partner,” as well as to force Europe to increase its dependence on Russian energy resources through the North and South Streams. This, in turn, according to the plan of the Kremlin strategists, would lead to greater loyalty of the EU countries with the Putin regime in foreign policy issues.

3) This gas blackmail of Ukraine was especially intensified in 2014 - 2019, when, after the victory of the anti-authoritarian Revolution of Dignity in Ukraine, the Russian Federation annexed Crimea and launched military aggression in the Donbas. Thus, the new round of the gas conflict has become one of the most important elements of the “hybrid war” of the Russian Federation against Ukraine. At its first stage (in 2014), this new Russian-Ukrainian gas war was expressed not only in public debate over prices and pipelines and threats to cut off supplies of raw materials but also in direct seizure of the Ukrainian gas transportation infrastructure by Gazprom subsidiaries both in the occupied and in the annexed territories with the support of the Russian military.

In these conditions, the Russian demands to Ukraine to pay more for the gas supplied look like blatant arrogance and mockery when, de facto, the aggressor demands his victim to pay him the expenses incurred. Note that from April 1, 2014, Gazprom raised the price for Russian gas to Ukraine from $268.5 to $485 per 1000 cubic meters. However, Ukraine had nowhere to go, because during the hot phase of the “hybrid war” its gas demand increased even more, and in May 2014 it had to pay Gazprom its debt while refusing to recognize the new gas price, appointed by Gazprom officials, and appealing to the International Arbitration Court with a lawsuit against Gazprom. We are sure that Alexander Medvedev, as an official who has been responsible for Gazprom’s activities abroad for many years, bears huge personal responsibility for this unprecedentedly hot and protracted phase of the Russian-Ukrainian gas conflict.

However, Putin, by the hands of Gazprom’s head Alexei Miller, dismissed Alexander Medvedev from the corporation in early 2019 because the latter had ceased to properly cope with the gas war against Ukraine. In February 2018, Ukraine won the Stockholm international arbitration against the Russian Federation and Gazprom and filed a new multi-billion dollar lawsuit against Gazprom in July 2018. Given the fact that the Stockholm arbitration is difficult to suspect of political engagement, we can also say that the key point in the previous gas disputes between Gazprom and Naftogaz was not the intransigence of the Ukrainian side, but the fundamental unacceptability of the Kremlin’s and its Gazprom officials’ position for Ukraine.

Putin’s Revolution: The Role of the Intelligence and Security Services in the Revitalization of Russia

Bulgaria’s “Overgas,” a Russian Spy in Canada, and Gazprom