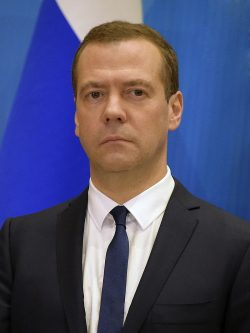 MEDVEDEV, Dmitry Anatolyevich (b. 1965) is a current Chairman of the Government of the Russian Federation and former President of Russia. Born in Leningrad (Saint-Petersburg), he graduated from the Leningrad State University in 1987 with a major in law and completed his postgraduate studies in 1990. From 1990 to 1997, he taught at St. Petersburg State University. At the same time, in 1990-1995, he was an adviser to the chairman of the Leningrad City Council Anatoly Sobchak, then he became an expert at the Committee on External Relations of the St. Petersburg Mayor's Office, chaired by Vladimir Putin. There, Medvedev was engaged in the development and execution of transactions, contracts and various investment projects. According to some reports, Medvedev defended Vladimir Putin from corruption allegations following an investigation into the activities of the Committee on External Relations in 1992.

Vladimir Putin, who became Prime Minister in 1999, invited Medvedev to the capital. In November 1999, he was appointed Deputy Chief of Staff of the Government. In 1999–2000, after Boris Yeltsin left the presidency, Medvedev became deputy head of the Presidential Administration. In 2003, Medvedev became the head of the Presidential Administration. In 2000-2008, he was Chairman of the Board of Directors of Gazprom. On November 14, 2005, Medvedev was appointed First Deputy Prime Minister of Russia. On December 17, 2007, the United Russia party supported by Putin nominated Dmitry Medvedev for the President of Russia. March 2, 2008, Medvedev won the presidential election.

In November 2008, he proposed amending the Constitution of Russia, which would extend the powers of the president and the State Duma to six and five years, respectively. On September 24, 2011, at the United Russia Party Congress, Dmitry Medvedev proposed the candidacy of Vladimir Putin in the presidential election in 2012. Since May 2012, Medvedev has been Chairman of the Government of the Russian Federation.

Complicity in the usurpation of power, corruption, the outbreak of aggressive war, the occupation of the territory of sovereign states, the suppression of civil rights and freedoms.

Dmitry Medvedev has been Vladimir Putin’s closest associate and accomplice in his crimes for many years. He consistently supported Putin’s policies aimed at concentrating power and property in the hands of Putin and his cronies. In 2008, he took part in the special operation of power transfer from Putin, to maintain Putin’s control over Russia.

The operation to formally replace Putin with Medvedev as president of the Russian Federation became known as a “castling” in society, which emphasized the imitation nature of this procedure. Replacing Putin with Medvedev was due to a constitutional ban on the same person holding the presidency for more than two consecutive terms. The actual appointment of Medvedev as a successor made it possible to circumvent this ban, retaining most of the power, while placing a controlled and dependent person on the presidency. The operation “Successor” carried out with the participation of Dmitry Medvedev became a convenient form of usurpation of power, which did not require a change in the Constitution and should not cause questions from the international community.

In August 2008, he launched an aggressive war against Georgia. As a result, a part of the Georgian territory remained occupied by the Russian troops. On August 26, 2008, Medvedev signed Decrees on the recognition of the independence of Abkhazia and South Ossetia, Georgia’s breakaway regions, which institutionalized the occupation of Georgian territory.

In the fall of 2011, Medvedev started the process of reverse power transfer to Putin, proposing him for the presidency at the United Russia congress, and refused to participate in the upcoming presidential election. Medvedev’s actions allowed Putin to remain in power without formally changing the Constitution.

In 2014, as Chairman of the Government of Russia, he supported the annexation of Crimea and contributed to the outbreak of war in the South-East of Ukraine.

On September 15, 2016, Alexei Navalny’s Anti-Corruption Foundation (FBK) published an investigation into the corruption schemes concerning Medvedev’s summer residence complex. After 2011, the complex was transferred to the Fund for the Preservation of Historical and Cultural Heritage. FBK estimated the cost of restoring the estate at 25-30 billion rubles (approx. $1 billion). According to Navalny, 33 billion rubles spent for the purchase and renovation of the site, came from the money Novatek shareholders allocated to the Dar charity affiliated with the Medvedevs.

On March 2, 2017, Alexei Navalny’s Anti-Corruption Foundation published an investigation film, “He Is Not Dimon for You”. The film tells about the alleged property of Dmitry Medvedev. According to the authors, Medvedev owns expensive real estate, allegedly purchased with money from oligarchs and loans from Gazprombank registered to charitable foundations and organizations affiliated with Medvedev's trustees.

All the Next President’s Men

Russia’s Putin set to return as president in 2012

The Yellow Rubber Duck Is a Potent Protest Symbol