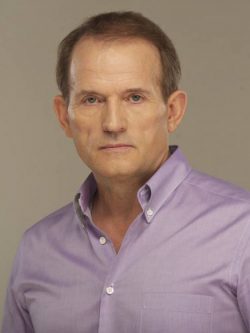 MEDVEDCHUK, Viktor Vladimirovich (b. 1954) is a Ukrainian politician and media tycoon, Vladimir Putin’s close confidant. Born in Siberia, he grew up in Ukraine. In his student days, he was a Komsomol activist under the patronage of the KGB. This fact helped him to avoid going to jail in 1974 for beating up a teenager. He graduated from Taras Shevchenko National University of Kyiv in 1978 as a lawyer. In 1979, he represented the dissident poet Yuri Litvin and another dissident poet Vasily Stus in the early 1980s as the state-appointed lawyer. Both of them got prison sentences and died in custody.

Since the 1990s, Medvedchuk has had a great influence on the legal community of Ukraine. He founded BIM Law Firm in 1992 and was president of the Ukrainian Bar Association from 1990 to 2006. He was also a member of the High Council of Justice, the highest judicial governing body overseeing the appointment of judges, from 1998 to 2004 and from 2007 to 2010. Medvedchuk's career rise in the 1990s was due to his good relations with the country's first president, Leonid Kravchuk. Together they became co-founders of the United Social Democratic Party of Ukraine. Medvedchuk supported Kravchuk against Leonid Kuchma in the 1994 presidential election, but later, after Kuchma’s victory, Medvedchuk became one of the new President’s main allies and the head of his administration in 2002-2005. At that time, Mevedchuk established close relations with Putin, and in 2004 Putin became the godfather of Medvedchuk’s daughter.

In 2004, Medvedchuk was accused of organizing fraud in the presidential election in favor of the then Prime Minister Viktor Yanukovych, which provoked the Orange Revolution and the subsequent re-vote. After the victory of the revolution, Medvedchuk lowered his activity for a while, but in 2007 he was appointed the head of the High Council of Justice and mediated negotiations between Prime Minister Yulia Tymoshenko and Gazprom and the pro-Russian opposition leader Yanukovych.

As it became known in April 2021, the State Bureau of Investigation (SBI) of Ukraine opened criminal proceedings on treason against Medvedchuk and another MP from Medvedchuk's party, Taras Kozak.

On April 11, 2021, Viktor Medvedchuk and Taras Kozak were charged with high treason.

Direct cooperation with the Kremlin, treason to Ukraine.

Viktor Medvedchuk has long become a notorious figure in Ukrainian politics, the most influential lawyer for Putin's interests. Despite the known facts of his biography, directly or indirectly indicating cooperation with the KGB, Putin, Russian oil and gas companies, his participation in attempts to establish a pro-Putin government in Ukraine, he still plays an active role in Ukrainian politics and owns extensive business and media assets in the country.

Viktor Medvedchuk was the initiator of the “Ukrainian Choice” in April 2012, an anti-European course and pro-Kremlin organization. During Euromaidan from November 2013 to February 2014, President Viktor Yanukovych called Medvedchuk 54 times, including on February 20, when dozens of protesters died, which gave a reason to consider Medvedchuk as a communicator with the Russian government. At the time of the Russian invasion of Crimea, he stayed at his villa on the peninsula, and when the revolution won he flew with his family to Switzerland. Shortly thereafter, the United States imposed personal sanctions against for posing a “threat to the peace, security, stability, sovereignty or territorial integrity of Ukraine”.

However, a few months later, at the initiative of President Poroshenko, Medvedchuk was invited as an intermediary in the negotiations on prisoners’ exchange and political settlement of the conflict, between the Ukrainian authorities, the OSCE and representatives of the self-proclaimed “republics” of Donbas. Supposedly, Medvedchuk has strong ties within the Russian leadership and the self-proclaimed “republics”. Medvedchuk is the only person in Ukraine who is allowed to fly directly from Kyiv to Moscow, while all other direct flights between the countries are banned.

Medvedchuk continued his activity in Ukrainian domestic politics immediately after his return. He became one of the founders of the Party of Regions heir, the Opposition Bloc. He was also suspected of trying to build a network of public associations at regional levels promoting a “special status” for the Ukrainian regions. The Security Service of Ukraine (SBU), conducted pre-trial investigations on these cases. In July 2018, he joined the For Life party, founded by the Verkhovna Rada members who broke away from the Opposition Bloc sponsored by oligarch Dmitry Firtash. The party supported the candidacy of Yuri Boyko in the presidential election in 2019. A week before the March 31 elections, Medvedchuk and Boyko met in Moscow with Prime Minister Dmitry Medvedev.

In February 2019, the Prosecutor General's Office of Ukraine launched an investigation against Medvedchuk, accusing him of high treason and encroachment on the territorial integrity of Ukraine for his calls for autonomy for Donbas. Attorney General Yuri Lutsenko said that the prosecutor’s office will institute proceedings against Medvedchuk for illegally crossing the border, bearing in mind the visit of Medvedchuk and Boyko to Moscow.

In addition to numerous assets in real estate, pipelines, the oil, gas, coal businesses, as well as media owned by close partners and associates of Medvedchuk in Ukraine, the company of Medvedchuk’s wife, Oksana Marchenko, won a tender for the development of one of the three largest oil fields of the Khanty-Mansiysk Autonomous Okrug in Russia. Viktor Medvedchuk admitted that the company was registered to his spouse to avoid the sanctions.

Viktor Medvedchuk comes back with a vengeance

The 12 people who ruined Ukraine