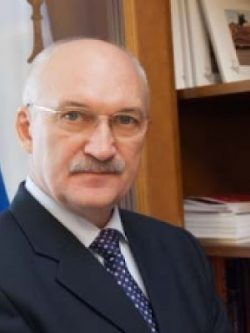 Deputy Chairman of the Constitutional Court of the Russian Federation.

Complicity in the constitutional coup and usurpation of power.

Judge Sergey Mavrin studied at the Faculty of Law of the Leningrad State University at the same time as Vladimir Putin and, according to indirect evidence, he is associated with the inner circle of the President of Russia. According to a study by Vladimir Pribylovsky regarding the origin and history of the Putin elite, Sergey Mavrin in the late 1990s - early 2000s was a co-founder of several law firms along with Putin's classmate Nikolai Dmitrievich Egorov. It is noteworthy that in 2004 one of Egorov’s law firms, “Egorov Puginsky Afanasiev & Partners” represented the interests of GRU agents in the Qatar court who were involved in the murder of Zelimkhan Yandarbiev, ex-vice president of the separatist Ichkeria. The very next year, a little-known professor of St. Petersburg State University became a judge of the Constitutional Court.

Sergey Mavrin always followed in the wake of the general line of the Constitutional Court, and only once expressed a dissenting opinion and even that was anything but democratic: in November 2005, he opposed the decision to allow citizens to campaign “against all candidates” due to the lack of control mechanisms for financing such agitation.

In 2020, during the hasty passing of Putin's amendments to the Basic Law, the Constitutional Court acted as the legalizer of the coup. On March 10, United Russia MP Valentina Tereshkova proposed lifting restrictions on the number of presidential terms or allowing re-election of Vladimir Putin to the presidency (“nullifying” the number of terms already held by him as president). Putin, who suddenly appeared at a meeting of the Duma, supported Tereshkova’s statement but referred to the need to obtain a Constitutional Court opinion on the conformity of the amendments to the current Constitution. Already after two days of consideration, the Constitutional Court almost wholly recognized the legality of “nullifying,” although in 1998, considering a similar case, it had forbidden President Yeltsin to run for the third time in a row. It is noteworthy that the judges explained the new decision by the “special clause” included in the Basic Law which had been absent earlier, which takes into account certain “historical factors <...>, including the degree of threats to the state and society, the state of the political and economic systems.” According to many experts and analysts, allowing Putin to remain president after 2024 was the main goal of the whole venture with the amendments.