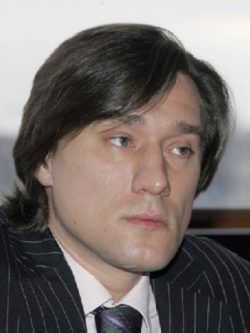 Russian businessman, son of the former governor of St. Petersburg and chairman of the Federation Council, Valentina Matvienko.

MATVIENKO, Sergey (b. 1973 in Leningrad) graduated from the Institute of Modern Business in 1992 and became a manager at an investment fund. In 1994, he participated in a robbery of an apartment and beating up his acquaintance Rozhkov, who owed a debt to him. A criminal case was opened, but thanks to the intervention of his mother, at that time - the ambassador of the Russian Federation in Malta, all the blame laid on his accomplice.

In the mid-1990s, Sergey Matvienko participated in the registration of several one-day firms, and also worked as a marketing manager and an economist. After his mother was appointed deputy prime minister of the Russian government, Sergey became a chief manager on corporate finances at the Baltic Financial Agency. In 2001, he was appointed adviser to the information technology board at St. Petersburg Bank, and in 2003, after Valentina Matvienko was elected governor of the city, he became vice president and shareholder of St. Petersburg Bank. In the same year, he became the sole owner of the Empire company, engaged in investment projects in pharmaceuticals, construction, cargo transportation, and advertising.

In 2004, Sergei Matvienko was appointed vice president of Vneshtorgbank (VTB). Two years later, he established VTB Capital. In 2010, he received the position of Director General of VTB-Development, and by 2011, he entered the list of the richest Russians, having made a fortune of about 5 billion rubles. At this time, Sergey could afford to buy an island in neighboring Estonia for the construction of an elite cottage village and celebrate his birthday in the Yusupov Palace.

When Valentina Matvienko left the governor’s post in 2011 and took the honorary, but an insignificant position of the speaker of the Federation Council, Sergey’s 29 companies were closed, and he transferred his stake to partners in 14 other ones. Being himself a cocaine addict, he became vice president of the World League “Mind Free of Drugs,” and two years later he became the curator of the human rights project of the League “Protect World Addicts.” Currently, he receives income from numerous real estate objects that he inherited in the last years of his mother’s governorship.

The formula for success in Russia under Putin is “tell me who your parents are and I will tell you how successful you are as a businessman.” Sergey Matvienko was lucky with his parents. His mother, an active politician since the Communist times, made her son a billionaire. With a reduction in Valentina Matvienko’s influence, however, Sergey’s business began to fade. Anyway, he became the rightful owner of numerous land plots, palaces, and buildings in St. Petersburg, securing himself a comfortable life.

According to Russiangate, in the last years of Valentina Matvienko’s governorship, Sergey purchased ten land plots in St. Petersburg and nine expensive buildings worth about 8.4 billion rubles at ultra-low prices. By the decisions of the ex-governor of St. Petersburg, Sergey Matvienko paid at prices several times lower than market prices. It is noteworthy that seven of the nine buildings received by him from his mother were objects of Russian cultural heritage.

In 2007, the media reported on the ties between Sergey Matvienko and the leader of the Tambov gang, Vladimir Barsukov-Kumarin. Kumarin and Matvienko had known each other since the 1990s, and already in the mid-2000s, Matvienko invited Kumarin to take part in a project related to the ferry-crossing complex. He proposed the mafia boss to provide security support, and the son of the official, in return, could take over the solution of issues with officials. Kumarin, however, refused to participate in this project and was soon arrested.

The story of Sergey Matvienko shows that the wealth and overwhelming success of the children of Putin's elite rests only on the administrative and punitive resources of the current regime. As soon as kleptocrats lose their influence, the affairs of their talented children begin to stall. Putin’s officials, with the help of their offspring, strive to spread their influence and provide themselves with a financial “airbag.” This means that pressure on Russian kleptocrats should be extended to their families. The facts of their illegal enrichment should be taken into account and investigated. Thus, when the political situation changes in Russia, these people should not be allowed to convert the property into political influence and take revenge.