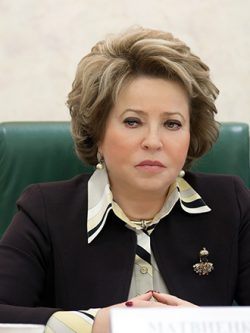 In 1986-1989, she was Deputy Chairman of the Leningrad City Executive Committee on Culture and Education. She was involved in the first public scandal of perestroika times. She played a role in the demolition of the cultural monument, the Angleterre Hotel in 1987. The mass demonstration of locals who defended the monument was severely dispersed by the police. Matvienko appeared in the party press and on the radio, claiming that the monument was of no cultural significance, but the city’s defenders saw a corruption component in Matvienko’s actions — disregard for public opinion in the interests of potential developers of the site on Isaakievskaya Square in the city center.

In 1989, Matvienko became a people's deputy of the USSR from the Committee of Soviet Women and up to the end of the USSR served as chairman of the Committee of the USSR Supreme Council for Women, Family, Maternal and Child Welfare, and was a member of the Presidium of the Supreme Soviet of the USSR. After the collapse of the USSR, Matvienko began a diplomatic career (1991-1998). She was the ambassador to Malta, the ambassador on special missions, a member of the board of the Russian Foreign Ministry, and the ambassador to Greece. In 1995-1997, she headed the department of the Ministry of Foreign Affairs for relations with the subjects of the Russian Federation and public organizations. At that time, she was in touch both with Yevgeny Primakov and a vice-mayor of St. Petersburg, Vladimir Putin.

The next round of Valentina Matvienko’s career was the work as a Vice Prime Minister for social affairs, from September 24, 1998, to March 11, 2003. When Vladimir Putin became a President in 2000, she attempted to run for governor of St. Petersburg. However, the first governor’s campaign of Matvienko was canceled. According to journalists and experts, the reason for that was the results of opinion polls, which gave her a very low rating.

On March 11, 2003, by Putin’s order, she became the plenipotentiary of the President of the Russian Federation in the Northwestern Federal District and held this position until October 15, 2003. This period was marked by a grandiose celebration of the 300th anniversary of St. Petersburg and the early dismissal of its governor, Vladimir Yakovlev. In the fall of 2003, she won the election and became governor. In 2006, she resigned and, following the new procedure for the appointment of regional heads, became the governor by decree of Vladimir Putin.

On March 1, 2014, she convened an emergency meeting of the Federation Council, where senators voted to allow President Putin to use Russian troops on the territory of Ukraine. As a speaker of the Federation Council, she has repeatedly made statements on foreign policy issues aimed at inciting hostility against the United States and other Western counties. She is included in the sanctions lists of the United States, EU, and several other countries.

Direct participation in the formation of the Putin regime, where she plays one of the key roles. She participates in the implementation of anti-democratic initiatives of the United Russia party and Vladimir Putin.

She is responsible for strengthening dictatorship, the repressions against dissent and freedom of the press both at the level of St. Petersburg, the second most important city in Russia, and later, at the federal level. An example here is the violent suppression of protests by the St. Petersburg opposition in 2007-2011, as well as the use of administrative resources in election campaigns at various levels, pressure on the media.

She actively participated in the destruction of historical and cultural monuments of St. Petersburg in favor of corruption schemes. She is also responsible for participation in the adoption and implementation of anti-democratic laws, including the Dima Yakovlev Law, the “Sovereign Internet” law, etc. She repeatedly claimed the need to tighten legislation on rallies.