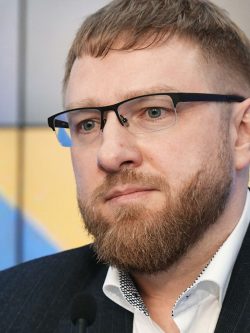 Chairman of the Commission of the Public Chamber of Russia for the development of mass media and mass communications. General Director of the Saint Petersburg TV channel since January 2021.

Alexander Alexandrovich Malkevich was born June 14, 1975, in Leningrad. In 2019, he founded and headed the non-profit organization Foundation for the Protection of National Values. Engaged in journalism since 1991, he was the deputy chairman of the press committee of the St. Petersburg mayor's office. In December 2018, he came under American sanctions after being detained in Washington, DC on suspicion of interfering in political processes in the United States. Since 2021, he has been General Director of the Saint Petersburg TV channel.

He is the Chairman of the Commission of the Public Chamber of the Russian Federation for the Development of the Information Community, Mass Media and Mass Communications, President of the Foundation for the Protection of National Values, an expert on the development of the media, media freedom, information security, as well as US domestic and foreign policy, Chairman of the Coordinating Council for Regional Media at the Public Chamber (OP) of Russia, initiator of the creation of the Coordination Council for Counteracting the Distribution of Illegal Content on the Internet and Protection of Users at the Public Chamber of Russia, member of the Expert Council for Regional Television and Radio at the Ministry of Digital Development, Communications and Mass Media of Russia, laureate of the Government Prize Russia in the field of culture 2017.

Meddling in the American elections, the use of the so-called “troll farms” as an instrument of information policy, and government-sponsored pressure on the electoral process within Russia.

On November 11, 2018, Malkevich was detained in the United States on suspicion of interference in the electoral process. Earlier, he launched a news site USA Really, setting out the facts in an extremely biased form, and financed by the “Putin's cook” Yevgeny Prigozhin. The website is directly linked to the Prigozhin’s FAN - “Federal News Agency,” actually copying the style and views of his “troll farms,” adapted for an American reader. At the same time, Malkevich himself prefers to talk about “the new McCarthyism and the witch-hunt, comparing his website to Radio Liberty, which operates in Russia with money from the United States.”

The degree of awareness and immersion of Alexander Malkevich in the realities of the American electoral process was evidenced by the reactions to his detention in the official Russian government-sponsored media: “He was in the United States as a public figure, as an observer at the midterm elections to Congress” (TVC), “Alexander Malkevich was in the United States as a journalist: he covered elections, talked to Americans, attended open events” (Russia 24), “Journalist Alexander Malkevich said that he saw many violations of the electoral process: for example, voting machines were out of order” (360), etc. Alexander Malkevich himself is more than frank about the tasks and goals of his own media project: “Yes, we are trying to influence readers, but so what? All media do it.” Speaking already in the role of Deputy Chairman of the Public Chamber of Russia Commission on Mass Media, Alexander Malkevich prefers to talk exclusively about the interference of “external forces” in the internal Russian election campaign: “The election campaign is underway in Russia. And we see facts of external interference: right from the beginning of January, there planned large PR campaigns using the latest social technologies on new media platforms. And, of course, we need to fight this.”