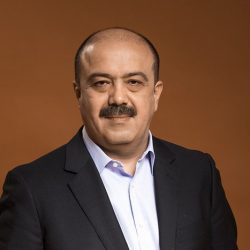 President of the Ural Mining and Metallurgical Company (UMMC)

MAKHMUDOV, Iskandar Kakhramonovich (b. 1963 in Bukhara) graduated from the Arabic department of the Faculty of Oriental Studies of Tashkent State University in 1984. In 1984-1986, he worked in Libya as a translator of a group of Soviet military advisers and specialists from the Main Engineering Directorate of the USSR State Committee on Foreign Economic Relations. In 1986-1988, he continued to work as a translator in Iraq in the Office for the Construction of Military Facilities of the Iraqi General Staff.

In 1988, he returned to Tashkent and from 1988 to 1990, he worked for the state joint-stock company Uzbekintorg. There he met with the brothers Leo and Mikhail Cherny, who owned aluminum and coal businesses. Later, he moved to Moscow and became a partner in the Trans World Group (TWG), owned by the Cherny brothers. According to media reports, “in 1993, Makhmudov left TWG, remaining a partner of Mikhail Cherny in other projects, and in 1994, he began buying up shares of copper enterprises.”

In 1994, he participated in the privatization of the Pavlodar aluminum smelter in Kazakhstan. In 1996, he headed the leading enterprise in the Urals for the extraction of copper ore, the Gaisky Mining and Processing Plant. In 1998-1999, with the support of Mikhail Cherny, Makhmudov created the Ural Mining and Metallurgical Company (UMMC). In the late 2000s, the media reported about the UMMC as a holding uniting the assets of about 30 enterprises located in ten regions of Russia and controlling the production of about 40 percent of Russian cathode copper, a quarter of the domestic non-ferrous metal market, and also more than half of the European copper market powders.”

In the early 2000s, Makhmudov also paid attention to the production of the carriages. In partnership with Dmitry Komissarov, he created the Transmashholding. In 2003, the holding became the owner of the Novocherkassk Electric Locomotive Plant (NEVZ), a monopoly producer of freight electric locomotives. Then he acquired controlling stakes in the Tver Carriage Works, and later, the Demikhovsky Machine-Building Plant (manufacturer of electric trains). By 2006, Transmashholding became the largest producer of rolling stock for railways in Russia, which included about a dozen engineering enterprises.

In 2008, Makhmudov became a co-founder of the Unified Food Network (ESP), a network of catering facilities for train passengers. In 2010, Makhmudov and his partner Andrei Bokarev bought a stake in Aeroexpress LLC, an operator of rail transportation services between Moscow and airports. In 2011, together with Bokarev, they became owners of Central Suburban Passenger Company, which provides suburban transportation in Russia. In 2012, partners also acquired 13% of Transoil LLC, one of the largest railway carriers of oil and oil products.

In 2009, Spanish law enforcement agencies accused Iskandar Makhmudov, as well as two of his former partners, Oleg Deripaska and Mikhail Cherny, of laundering criminally obtained money in Spain. According to investigators, money was laundered through a subsidiary of UMMC, Vera Metallurgica, owned by Makhmudov, Deripaska, and Cherny. It is worth noting that in 2011, a Spanish court referred a criminal case on money laundering to the Russian Prosecutor General. However, in October 2017, the investigative department of the Ministry of Internal Affairs of the Russian Federation terminated the criminal case for lack of corpus delicti.

In 2016, investigative journalist Konstantin Rubakhin published an investigation on the theft schemes and the withdrawal of money by co-owners of the UMMC group. According to the investigation, Iskandar Makhmudov and other co-owners of the group used the UMMC in a criminal scheme to seize dozens of metal processing enterprises and luxury real estate in Europe.

In February 2019, the Mediapart investigation mentioned Iskandar Makhmudov as “an oligarch close to Putin,” who, to protect his family and assets in France, signed a contract with a company that provides security services for top officials in France. Mediapart suggested that the mediator in the signing of the contract was Alexander Benalla, who at that time officially worked in the presidential administration of France. The commission of inquiry of the French Senate concluded that these contracts could harm the security of the head of state and the interests of the state. The financial prosecutor’s office began checking the legality of the signed contract.

In January 2018, Iskandar Makhmudov was included in the Kremlin Report of the US Treasury Department, a list of senior officials and businessmen close to the Russian leadership.