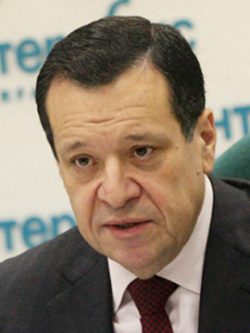 Member of the State Duma of Russia, TV presenter

MAKAROV, Andrei Mikhailovich (b. 1954 in Moscow) is a Russian lawyer, politician, TV presenter, State Duma member of six convocations, member of the United Russia faction, chairman of the budget and tax committee, co-author of the Tax Code. Andrei Makarov graduated from the law faculty of Moscow State University in 1976. After graduation, he worked there as a lecturer and then worked at the All-Union Research Institute of the Ministry of Internal Affairs of the USSR. He was considered an unofficial speechwriter of the minister. In 1983-1993, he was a lawyer at the Moscow City Bar Association. In 1990, he became the Legal Director, and in 1992, the Head of the Cultural Initiative Fund (Soros Foundation). In 1992, he was the Prosecutor for the CPSU Case before the Constitutional Court of the Russian Federation.

In 1993, Makarov was a member of the working group on the preparation of the new Constitution draft. On April 29, 1993, he headed the department for ensuring the activities of the Interdepartmental Commission of the Security Council of the Russian Federation to combat organized crime and corruption in the highest echelons of power. In 1993, he was elected to the State Duma of the Russian Federation of the first convocation from the list of the Democratic Choice of Russia. In 1994-1997, he headed the Russian Chess Federation. In 2003, he worked as an adviser to the governor and vice-governor of the Kemerovo region on the legal support of the economic activity.

Direct and active participation in the usurpation of power and the formation of a regime of personalist dictatorship in Russia.

The basis of the accusation is his long-time activity as a member and one of the leaders of the State Duma of the Russian Federation from the “party in power,” participation in the creation and maintenance of a system of legitimizing violence and arbitrariness under the guise of democratic lawmaking, initiating, lobbying and propaganda of legislative decisions in the interests of the main beneficiaries of the Putin regime.

Andrei Makarov is an author and initiator of numerous laws against the free market and small and medium-sized businesses to preserve and strengthen the oligarchic nature of the Russian economy. In 2014, Makarov initiated amendments to the Tax Code on new municipal taxes from 22 types of businesses. The largest business associations gave negative feedback on the bill.

Makarov is the initiator of the Rotenberg Law, according to which a person under foreign sanctions may not be recognized as a tax resident of Russia if he is also a tax resident of another state. The document was adopted on March 22, 2017, by the votes of the United Russia faction. The law had a retroactive effect, according to which income tax can be refunded from 2014. In exempted 41 senior officials, propagandists, and oligarchs from Russia, Ukraine, and annexed Crimea from taxation in Russia.

In autumn 2018, he announced plans to seize income from self-employed people who were not tax registered: “We propose that if we find such income and a person does not register and does not pay [taxes], he pays a fine in the amount of the income he received.”

Makarov acts as one of the key propaganda experts justifying the supposedly economic need for controversial measures. Thus, he called the law on increasing VAT in 2018 “the least painful decision of all possible solutions for the economy.” Speaking about the sharp increase in Russia's military spending, he explained it by the geopolitical situation, in particular, the American policy.

Makarov is one of the most active propagandists of Putinism, an authoritarian system of power based on the exaltation of the role of Vladimir Putin. In February 2019, commenting on the presidential message, he said that “These are, of course, calculated decisions, based on the potential that the country has accumulated over the years, despite any sanctions and crises. This potential allows us to solve a whole new level of tasks set by the President.”