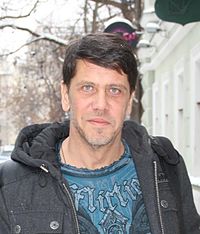 Journalist, propagandist, one of the founders of the Versiya newspaper

LURIE, Oleg Anatolyevich (b. 1963 in Kharkiv) graduated from the philological faculty of Kharkiv State University in 1988. Having lived a year in Canada, he returned to the USSR in 1990 and became the manager of singers Larisa Dolina and Vladimir Kuzmin. In 1992, he moved to Moscow and headed the International Slavic Charity Foundation. In 1994, Lurie became a journalist. First, he worked for Ukrainian media, and later he became an assistant to several members of the State Duma of Russia. In 1996-1997, Oleg Lurie worked in the press service of the State Duma and ran for the Moscow City Duma from the LDPR party (unsuccessfully). In 1997, he broke up with the party leadership and became an independent journalist.

In 1997, Lurie became a special correspondent for the Investigation Department of Express-Gazeta, and in 1998-1999, he worked as an op-ed columnist for the Investigations Department of the Sovershenno Sekretno Holding, becoming one of the founders of the Versiya newspaper. His investigation published in 1999 in the Versiya about the participation of Peter Aven and Mikhail Fridman in organizing the transit of drugs from Southeast Asia through Russia to Europe, illegal contacts with organized crime, and other illegal actions became scandalous and was deemed untrue. In 2000-2003, Lurie was a columnist for Novaya Gazeta, where he investigated the activities of the Office of the President of the Russian Federation in the so-called Mabetex Case about multi-million embezzlements during the repair of the Kremlin. The result of his journalistic investigation was the dismissal of Presidential Affairs Manager Pavel Borodin. In December 2000, he was attacked after speaking in NTV's Voice of the People program, sharply criticizing the Presidential Administration and some oligarchs. In 2004-2005, Lurie published the magazine VVP with Putin’s portraits and advertising articles. In 2005, he created and published the youth magazine JEANS - Territory of Freedom.

In January 2008, Oleg Lurie was arrested on suspicion of extortion and fraud against the general director of the World Class Clubs gym network Olga Slutsker and her husband, Senator Vladimir Slutsker. In March 2009, he was found guilty and sentenced to 8 years in prison. In the summer of 2009, after the review of the sentence, the prison term was reduced to 4 years. He was released in December 2011. After the early release, Lurie participates as an expert in the program of the famous propagandist Vladimir Solovyov on the Vesti FM radio, as well as in the propaganda TV programs of Channel One, Rossiya-1, Rossiya-24, RenTV, NTV, TVC, Stars, Tsardgad, and others. He is published in the newspapers Versiya, Novye Izvestia, Nezavisimaya Gazeta, and others.

Advocating for the Magnitsky’s case in the interests of Putin’s officials, conducting a propaganda campaign against the Russian opposition, information support for Russian aggression in Ukraine.

Former controversial journalist Oleg Lurie, known for investigations about oligarchs, senior officials, and politicians, dramatically changed the tone and objects of his attention after his early release. Now he exposes opposition leaders and disgraced officials. A sudden review of his case and early release may not have been a fluke. As it turned out a few years later, in the summer of 2009, Oleg Lurie met in a prison a lawyer from the Hermitage Capital fund, Sergei Magnitsky, who revealed multibillion-dollar theft schemes from the Russian budget and died in jail in November 2009. Oleg Lurie spoke several times with Sergei Magnitsky, and the information received by the journalist could highly likely be used by Russian law enforcement agencies and authorities, as well as speed up the decision to kill Magnitsky.

One way or another, in the summer of 2009, Lurie’s case was reviewed and his sentence halved. After his release, convicted of fraud and extortion, Lurie testified against the head of the Hermitage Capital fund, William Browder, which became the basis for a criminal case against the financier. This was the second case against Browder that observers linked to the activity of the financier in promoting the Magnitsky Act, a package of international sanctions against human rights violators, specifically in Russia.

His transformation into one of the pro-Kremlin propagandists, redirecting his boisterous energy to a safe channel for the Russian government, apparently was a result of a proposal of the Russian security agencies, which he could not refuse. The quality of his publications has fallen significantly, and once the controversial journalist Lurie has become one of the many bloggers serving the Kremlin. He replaced the public request for journalistic investigations by the request from the Presidential Administration. The topics and content of Lurie’s articles became predictable: stories about “fascist anti-Semites in Ukraine,” about “State Department agents” Navalny and Nemtsov, “exposure of the authors” of the Panama dossier, justification of any international crime of the Putin regime, whether it was the poisoning of Litvinenko and the Skripals, doping scandal, interference in elections or armed aggression against Ukraine. Oleg Lurie was blacklisted by the Mirotvorets center for misinformation, disseminating fake news and openly denying Russian aggression against Ukraine.