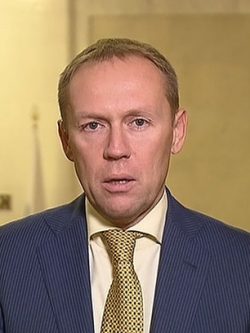 Member of the State Duma of Russia (2011 - to date), the killer of Alexander Litvinenko.

Lugovoi, Andrei Konstantinovich (b. 1966) is a Russian killer and politician. Born in Buku, he graduated from the Moscow Higher Military Command School in 1987 and was assigned to the Kremlin regiment, subordinate to the 9th KGB Directorate. In 1990, he graduated from the Higher Courses of Military Counterintelligence of the KGB of the USSR. In the early 1990s, he served as a bodyguard of senior government officials. After leaving the Federal Security Service, he headed the security service of the ORT TV channel owned by the oligarch Boris Berezovsky.

In 2001, Lugovoi became a defendant in an Aeroflot criminal case. In June 2001, Lugovoi and his accomplices tried to take out of the country the First Deputy General Director of Aeroflot, Nikolai Glushkov, accused of corruption and money laundering, but they were arrested by the FSB officers. According to the investigation, Berezovsky’s partner Badri Patarkatsishvili organized Glushkov’s escape in 2001. According to Glushkov himself, the charge of preparing the escape was used as an excuse to leave him in prison, and “Lugovoi was part of this FSB plan”. In 2004, the court sentenced Lugovoi to a year and two months in prison but he was released, as he had already served this term in jail. After his release, Lugovoi started his business: he was a member of the Board of Directors and beneficiary of the companies Devyaty Val (security activities), Pershin (beverages production), and Glavlizing (leasing). His security companies guarded the Berezovsky family.

In October 2006, Andrei Lugovoi and his colleague Dmitry Kovtun flew to London to meet with the former FSB officer Alexander Litvinenko, a friend of Berezovsky, who asked for asylum in the UK. Soon after, Litvinenko died of poisoning. After the examination established the cause of the poisoning, polonium 210, Scotland Yard investigators said that Litvinenko was infected on November, 1 in the bar of the Millennium Hotel during the meeting with Lugovoi and Kovtun. The British prosecutor's office considers Andrei Lugovoi as the direct executor of the murder. Soon after the accusations and Moscow’s refusal to extradite Lugovoi, he ran for election to the State Duma in 2007. Lugovoi became a member of the Russian parliament and was successfully re-elected in 2011 and 2016.

The implementation of political terror, complicity in the suppression of the rights and freedoms of Russian citizens.

On November 1, 2006, Andrei Lugovoi and Dmitry Kovtun poisoned Alexander Litvinenko with the radioactive Polonium-210, and Alexander Litvinenko died on November 23. Presumably, the president of Russia personally approved the operation. This crime was carefully planned by the Russian special services, and the role of the killers was not accidental for Lugovoi and Kovtun. Shortly before his death, Litvinenko was commissioned by the head of the consulting company Titon, Dean Attew, to prepare a report on the relationship of Putin’s close associate Viktor Ivanov (later the head of the Federal Drug Control Service) with the Tambov organized crime group, which was engaged in drug trafficking and racketeering in St. Petersburg in the 1990s. Litvinenko, as it became known during the hearing, gave a copy of the report to Andrei Lugovoi, whom he considered his business partner. Upon returning from London, Lugovoi was stopped at the airport, and the FSB found this file. According to Yuri Shvets, a former KGB agent and co-author of the report, now living in the States, this became a trigger for the murder of Litvinenko. The role of killers was assigned to Litvinenko’s partner Lugovoi and his colleague Kovtun.

Lugovoi invariably denies his role in the crime and, following the logic of state propaganda, blames Berezovsky for it. At the same time, in an interview with El Pais in 2008, Lugovoi claimed that “in the interests of the state, those who cause serious harm to the government should be destroyed”. Later, he became a presenter at the Zvezda TV channel owned by the Ministry of Defense, where he hosted the “Traitors” program about Soviet defectors. “The main thing that we see that each traitor will have an inglorious end”, says the presenter on the background of the FSB building on Lubyanka.

As a reward for the murder of Litvinenko, Lugovoi received the State Duma member mandate and the Order for Merit to the Fatherland from Putin’s hands. In the State Duma, Lugovoi invariably voted for all the laws restricting freedom of assembly, speech, political representation, as well as for the annexation of Crimea and for the ban on Americans from adopting Russian orphans. Besides, it was Lugovoi who initiated the federal law No. 398 of December 28, 2013, which allows for pre-trial blocking of websites for “extremism” reasons. Currently, this law is widely used as an instrument of government censorship on the Internet. In 2019, Lugovoi voted for the isolation of the Internet in Russia. According to the adopted law, the Russian authorities will be able to control the connection points of the Internet with the outside world and will be able to isolate the Runet.

On 9 January 2017, under the Magnitsky Act, the United States Treasury's Office of Foreign Assets Control updated its Specially Designated Nationals List and blacklisted Andrei Lugovoi, which froze any of his assets held by American financial institutions or transactions with those institutions and banned his traveling to the United States.

Report into the death of Alexander Litvinenko

Anyone harming Russia should be exterminated, says Andrei Lugovoy