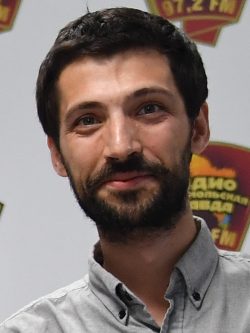 Journalist, producer, expert, and guest of the RT-owned YouTube channel “Beautiful Russia boo-boo-boo,” host of the YouTube show This is Leontyev.

Born on June 25, 1983, in Moscow. Son of Mikhail Vladimirovich Leontyev, journalist and adviser to the president of Rosneft Oil Company, and a long-time associate of Vladimir Putin, Igor Sechin. He is one of the regular guests of the RT-owned YouTube channel “Beautiful Russia boo-boo-boo,” aimed at deliberately defaming the opposition to the Putin regime. He is also an employee of the Komsomolskaya Pravda radio, where, together with his father, journalist Mikhail Leontyev, he runs the “What is Bad?” show.

He hosts the political show This is Leontiev on his YouTube channel. The shooting of the first edition took place on Triumfalnaya Square in Moscow. It was named “I am for doping” and advocated for the use of doping in sports competitions, following the accusations against Russia for using doping during the Olympics.

Dissemination of disinformation and propaganda in the interests of the Putin regime.

In his activities as a guest of the “Beautiful Russia boo-boo-boo” program, for which, according to FBK and Open Media, he receives monthly 444,000 rubles ($6,000) from the Russian budget and taxpayers, Mitya Leontyev not only defames Alexei Navalny (whose discussion is the central theme of all streams) and discusses the domestic events but also in the protest events in neighboring Belarus, which he sees as another unsavory involvement of the West. However, one of the most famous issues of “Beautiful Russia boo-boo-boo” with Leontyev was the broadcast, during which he unsuccessfully tried to call the press secretary of the politician Alexei Navalny, Kira Yarmysh, with a proposal to answer a number of questions. He continued discussing this unsuccessful attempt during several following streams.