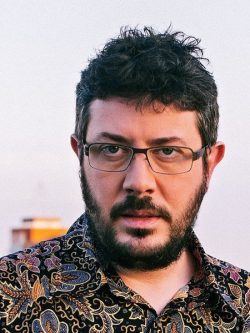 LEBEDEV, Artemy Andreyevich (b. 1975) was born in Moscow in a family of in the family of philologist Andrei Lebedev and writer Tatyana Tolstoy. In 1989, Lebedev moved with his parents to the United States, but a year later he returned to the USSR, having hated America, according to his own words. In 1991, he entered the Faculty of Journalism of Moscow State University but dropped out the following year. In 1992, he, together with his partner Arkady Troyanker, founded the A-Square design studio, and a year later founded the Arthografika studio, which designed books and magazines, and was also the art director at the MakTsentr studio. In 1995, Lebedev founded the WebDesign studio, which in 1998 was renamed to Artemy Lebedev Studio. Also in 1997, he founded the Internet advertising agency Reklama.Ru.

By the mid-2000s, Lebedev had gained a reputation as the most famous web designer in Russia. He also became famous as one of the most widely read Runet bloggers and travelers in Russia. He created logos for Yaroslavl, Perm, Odesa, and Kaluga region. Recently, Artemy Lebedev Studio has been fulfilling orders for various departments of the Moscow government.

Serving the structures of the ruling dictatorial regime, attacks on the opposition.

Artemy Lebedev is not just one of the leading designers in Russia, but he also claims to be a political influencer and public figure. Lebedev's hypocritical approach is to bully and attack the opposition while declaring himself apolitical. That produces an infantile discourse that is completely convenient for the Kremlin. First, to discourage people, and especially the middle class, from an interest in politics, and secondly, to instill a simple idea that “the anti-Putin opposition is worse than the government.” Thus, disarming the audience before a strengthening dictatorship.

It would be strange to think that Lebedev did not know the facts of the long-term, systematic pressure of the Putin regime on opposition: assassinations, raider seizures of TV channels, politically motivated refusals to register parties and election candidates, falsification of election results, intimidation, beatings, imprisonment and fining activists, surveillance and wiretapping by state security officers. He emphasized many times that he was not interested in politics and was indifferent to the ongoing processes, but a selection of only some of his sayings demonstrates which side of the barricades he is on:

“I am deeply convinced that in Russia there is no normal opposition, not because someone is bothering it, but because the whole opposition, all democrats, all right-wingers are much bigger assholes than the current government.” (2011) “If the Russian opposition does not understand why we need roads, then do we f**king need such an opposition? In United Russia, only solid assholes may sit, but if one of their thousand stupid decisions is to build a highway from city to city, then I am for such a decision.” (2012) “Against the backdrop of our opposition and its total stupidity, the official government looks like a bastion of common sense, rationality, and restraint.” (2013)

With the outbreak of the Kremlin’s armed aggression against Ukraine, Lebedev also openly made it clear which side he was on: “When suddenly the government manages to do something flawlessly (the Olympics, taking the Crimea), I see no reason not to praise it — these are ideal management operations.” “The Crimea was taken back from you [Ukraine], which was always ours anyway. And you ask the question whom Crimea belongs to,” said Lebedev. After such statements of Artemy, the head of the Kyiv office of Artemy Lebedev Studio, Alexander Solonko, said that Lebedev’s statement was the opinion of a private person, while the Kyiv office’s employees stood on Maidan from the very first day. As a result, Lebedev personally fired Alexander Solonko and studio project manager Gleb Petrov. Artemy Lebedev not only stated that he did not recognize the sovereignty and territorial integrity of Ukraine (“In Russia, everything is simple - the regions in the middle of the country are called oblasts, the regions along the edges are called krais, and one region is directly called Ukraine”) but also personally illegally entered the territory of Crimea, “DPR” and “LPR” in 2016. After his last visit to Kyiv in 2017, when he once again mocked Ukrainians and the protestors killed during Euromaidan, the SBU declared Lebedev persona non grata in Ukraine.

In 2017, Lebedev continued his attacks on the opposition, particularly on Alexei Navalny, who announced his presidential ambitions. In response, the opposition leader published information on his studio’s contracts with the government. From 2012 to 2016, Artemy Lebedev Studio completed 26 projects for government agencies, and in 14 cases, information about contracts was not publicly available.

Over the years, Artemy Lebedev has become an increasingly outspoken Putinist. In a December 2017 interview with Yuri Dud, he stated that his attitude towards Putin “was changing a bit over the years, but now this is the maximum respect.” Finally, he broadcasted anti-Western propaganda of a state TV level: “There is no freedom in the States. We [in Russia] have freedom, there is no lack of freedom In the States, you directly feel that you can’t do anything. A complete police state.” Therefore, it is not surprising that Lebedev in 2019 supported the notorious bill on the isolation of Runet, which allows the state to fully control Internet traffic in the country and carry out Internet censorship: “Only someone who understands what is happening now and what could threaten us could come up with such a bill. From a management point of view, this is an absolutely adequate, effective, understandable solution.”

In the summer of 2019, protests against the prohibition of independent candidates for running in the elections to the Moscow City Duma took place in Moscow, during which about two and a half thousand people were illegally detained, dozens were injured, and several criminal cases were brought against the opposition activists. At this time, Lebedev decided once again to troll the opposition by publishing a video stating that he allegedly left Russia for political reasons. The news about Lebedev’s alleged emigration became one of the most discussed in the media, after which he admitted to the prank. According to him, everything he said in the two-minute video was “a meaningless liberal shit.” Lebedev is really happy with everything: in the previous year, the studio earned about 9 million rubles on orders from Planetarium, VDNH, Administrator of the Moscow Parking Space, the Institute of the General Plan of Moscow and other organizations. In 2019, the studio’s income from the government agencies more than doubled (29.4 million rubles): only Mosgortrans placed an order for 15 million to develop website designs for GUP Mosgortrans, the Museum of Moscow Transport, and the mobile application of GUP Mosgortrans. Another 8.8 million was paid by the Directorate for Supporting the Activities of Labor Organizations and the Protection of the Population.

In September 2020, Artemy Lebedev noted that in his YouTube program he compared Stepan Putilo, the founder of the Nekhta telegram channel, with Bandera, accused him of working for "money from Polish intelligence" and called him a "matter of honor" for a "normal special service officer" the channel to "shut up". The statement was partially shown on the state channel Belarus-1.

On February 26, 2021, Lebedev published a document from which it follows that Yulia Navalnaya allegedly has German citizenship. This was denied by the German Foreign Ministry and the head of Navalny's network of headquarters, Leonid Volkov. Later, Lebedev also admitted his publication was fake and apologized to Yulia Navalnaya for publishing the fake. In turn, Yulia Navalnaya refused to accept his apology.