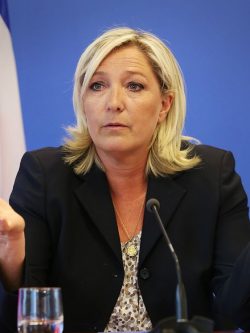 LE PEN, Marine (b. 1968) is a leader of the far-right National Rally party (previously - Front National), a member of the National Assembly since 18 June 2017. Born into a family of the future founder of the National Front (NF) party, Jean-Marie Le Pen, she earned a law degree from Pantheon Assas University in 1991 and a criminal law degree in 1992. From 1992 to 1998 she had a private law practice. In 1998, she began working in the NF apparatus. She served as party legal director until 2003, when she became vice president of the NF. The next year she got elected to the European Parliament. In the following years, her influence and reputation in the party increased, and she headed her father’s presidential campaign in 2007. In 2008, Marine Le Pen was elected to the Municipal Council of the city of Henin-Beaumont in Pas-de-Calais. In 2010, Marine Le Pen was elected to the Nord Pas-de-Calais Council.

When Marine Le Pen became an independent political figure, she distanced herself from some of her father’s views. She strengthened the left wing of the party, adopting the socialist rhetoric regarding criticism of economic liberalism, and tried to get rid of the image of the racist party. On January 16, 2011, Marine Le Pen was elected the new party president at the NF Congress. On May 16, 2011, the NF Political Bureau nominated her for the presidency in the upcoming 2012 elections. On April 22, 2012, in the first round of the presidential election, Marine Le Pen won about 18 percent of the vote and did not enter the second round, losing to the leader of the Socialist Party, François Hollande, and the then-current president, Nicolas Sarkozy. However, at that time it was the best result ever obtained by an NF candidate in the presidential election, including the second round of the election in 2002. The harsh remarks by Jean-Marie Le Pen and political disagreements with his daughter provoked public conflict, and in August 2015 the founder of the National Front was expelled from the party, which he had been leading for almost forty years.

After the failures of the socialists' economic and migration policies, as well as the growing mistrust of mainstream politicians, the popularity of the NF has grown. In the March 2014 local elections, the Le Pen party and its affiliated politicians triumphed in more than ten cities. The NF won the European Parliament elections in May 2014, receiving more than a quarter of the French votes. Le Pen approached the 2017 presidential election with great expectations, given the recent anti-establishment wave. However, she lost in the second round to the centrist Emmanuel Macron, gaining 34% of the vote. Despite the record low turnout, this result almost doubled the percentage of votes her father received in 2002. Nevertheless, the Le Pen party failed to repeat the success in the parliamentary election two months later: the NF got only 8 seats in the National Assembly, including Marine Le Pen.

On November 23, 2014, AFP announced that the Le Pen party received €11 million from Russian banks, including a loan of €9 million from the First Czech-Russian Bank. This bank, before the revocation of its license in 2016, belonged to the structures of Gennady Timchenko, a billionaire and close associate of Putin. Despite the scandal, the sanctions imposed on Timchenko and the subsequent closure of the bank, it turned out that Russian banks continued to sponsor the NF and, in particular, could finance Le Pen’s election campaign in 2017. According to the investigation, the party’s Executive Committee considered a “draft loan” of 3 million euros from the Russian Strategy Bank. Jean-Luc Schaffhauser, member of the European Parliament and an ally of Marine Le Pen, could be a mediator in obtaining both loans. He is known for traveling as an “elections observer” in the Russia-controlled breakaway regions in Eastern Ukraine in 2014. On the Russian side, Alexander Babakov, President Putin’s Special Representative for Cooperation with Organizations of Compatriots Abroad, oversaw the deal.

The party was sponsored in exchange for supporting the Russian position on Ukraine, criticizing sanctions against Russia and supporting repressive domestic politics in the Russian Federation. Thus, even before the discovery that Le Pen received money from Moscow, in 2013, she publicly supported Russian laws prohibiting “homosexual propaganda” and adoption of children by same-sex couples, as well as the repressive law on NGOs. It is noteworthy that at home in France, Le Pen repeatedly declared her support for the LGBT community, and her former chief strategist and deputy, Florian Philippot, was an openly gay person.

Le Pen supported the illegal annexation of Crimea, saying that “the results of the referendum do not cause any controversy. It was expected. And the people [of Crimea], who lived in fear, threw themselves into the arms of the country they came from because you know that Crimea has been part of Ukraine for only 60 years”. On January 3, 2017, she said that “I do not believe that there was an illegal annexation: there was a referendum, Crimean citizens wanted to join Russia”. She advocates for the federalization of Ukraine and opposes the integration of Ukraine into the Euro-Atlantic institutions. During the 2017 election campaign, Le Pen met with Vladimir Putin and proclaimed her intention to recognize Crimea as a part of Russia. Le Pen supports the Russian position on Syria and condemned the deprivation of the Russian Federation’s voting rights in PACE.

Currently, her party is going through hard times. In September 2017, the party's most important figures, including Florian Philippot, left the party. Over the next year, the party membership was halved. In the summer of 2018, shortly after the party’s rebranding into the National Rally, the French and European authorities opened an investigation into its leadership on suspicions of misuse of the European Parliament funds and partly blocked the party’s bank accounts.

The Making of Marine Le Pen