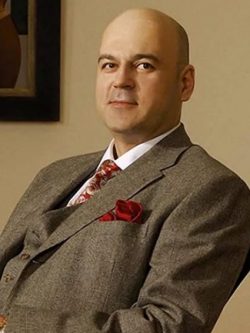 Russian oligarch, one of the key shareholders of the Alfa Group investment consortium.

KUZMICHEV, Alexei Viktorovich (b. 1962 in Kirov) entered the Moscow Institute of Steel and Alloys (MISiS) in 1983, where he met with German Khan and Mikhail Fridman, his future business partners. In the first year of study, Kuzmichev became a secretary of the Komsomol organization and joined the Communist Party. He graduated from the Institute in 1988 and until 1989, worked with Friedman, and then Khan in the cooperatives Courier, Alpha-photo, and Alpha-Eco (the last two provided the household services, the sale of carpets, copy machines, and computers).

In 1992, Alexey Kuzmichev presented a plan to his partners to scale up their businesses: he proposed them to start oil and metallurgy trading. Already at the end of the year, Crown Trade and Finance, Ltd. was founded, which was later renamed to CTF Holdings. In 1996, the businessman resigned from Alfa-Eco and headed the board of directors of the new company Crown Resources, registered in Switzerland and engaged in oil supplies. The years 2001-2002 were extremely unsuccessful for the billionaire’s business: numerous adverse events could put him on the brink of bankruptcy. The result was the redemption of Crown Resources from Alfa Group and its renaming to Expertica Corporation, which reprofiled from crude oil trading to transactions with oil futures. In the early 2000s, Alexey Kuzmichev returned to Alfa-Eco and became the head of its Board. In 2006, the company received a new name, A1, and continued to oversee the commodity segment of the corporation. He also took part in the management of other companies of the Alfa Group.

Kuzmichev headed the Russian Technologies venture fund for some time, later he was a member of the advisory board of Altimo, an investment telecommunications company belonging to Alfa Group. Kuzmichev indirectly controls about 10 percent of the 6th world’s largest mobile operator, Vimpelcom, 18 percent of one of the largest Russian private banks, Alfa-Bank, and 11 percent of Russia's largest food retail group, X5.

In March 2013, he sold his stake in TNK-BP to the state-owned oil company Rosneft for $2.5 billion. In 2019, Alexei Kuzmichyov became the sixteenth in the rating of 20 richest Russian businessmen published by Forbes. In 2018, his net worth decreased by $100 million and amounted to $7.5 billion. Kuzmichev is a Russian citizen and resident of the United Kingdom: since 2001, he has been living in London.

Raider seizures of enterprises, sponsorship of the Saddam Hussein regime, possible participation in the Kremlin’s meddling in the US presidential election.

In the late 90s and early 2000s, Alfa-Eco was at the center of a scandal with raider attacks. In 1996, the bankruptcy proceedings of the Achinsk Alumina Refinery (AGK) began at the suit of creditors. The court appointed Gleb Fetisov, president of Alfa-Eco, as an interim manager. In 1999, Alfa-Eco, with the support of the police, took AGK by force. In March 2001, creditors of the Achinsk plant signed a settlement agreement, and AGK became a part of Rusal. Alfa’s income from the resale of the Achinsk Alumina Refinery in 2000 amounted to 680%. In the summer of 2000, Alfa-Eco bought 42% of the shares of Alphavit Group from the small shareholders and tried to seize the plant. However, the capture attempt failed, but the plant director sold his stake to Rinako, an affiliate of MDM Group. After that, MDM bought the Alpha package as well. In May 2000, Alfa-Eco structures acquired a 50% stake in the trading house that produced Smirnov vodka. Alpha's management tried to negotiate to transfer the remaining 50% with the owner of the company, Boris Smirnov but failed. Then, Alfa-Eco took the company away from Smirnov by force. Similarly, Alfa-Eco took over the Moscow Fat Factory, Volga and Kama pulp and paper mills.

Since 1999, Kuzmichev’s Crown Resources company has been registered in Switzerland and engaged in the supply of oil, worked with countries such as Iran, Iraq, Venezuela, and Cuba. It is noteworthy that in 2006, a special commission led by the former head of the US Federal Reserve Service, Paul Walker, published a report on the implementation of the UN oil-for-food program for Iraq. Crown Resources participated in the program. The Commission concluded that 139 companies participating in the program overpaid the government of Saddam Hussein $229 million more than the amounts stipulated in the contracts. Almost $53 million of them paid the Russian companies. The report said that the money was received in cash at the Iraqi embassy in Moscow, and then Iraqi diplomats transported it to Baghdad in suitcases. The list included Rosneft, Slavneft, Zarubezhneft, LUKOIL, and others. Alfa-Eco and TNK were suspected of illegally paying $2.5 million to Saddam Hussein’s regime.

In January 2018, Alexei Kuzmichev got into the Kremlin list of the US Treasury, a list of Russian officials, politicians, and businessmen close to Vladimir Putin. Assumingly, sanctions may be imposed on these people, as they contributed to the interference of the Kremlin in foreign, including American, elections.