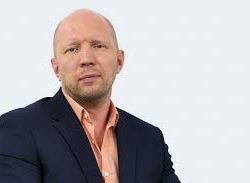 Russian propagandist, radio and television presenter. The host of the Vremya Pokazhet (Time Will Show) talk-show on Channel One. Secretary of the Union of Journalists of Russia.

KUZICHEV, Anatoly Alexandrovich (b. 1969 in Moscow) graduated from Moscow State Construction Institute. Since 1993, he has been a host at the radio stations Panorama, Radio Rocks, and Nostalgie. For some time, he hosted the Day After Day program on the TV-6 Moscow channel. In 2001-2002, he was a co-host on Channel Three, from 2002 to 2003, on ORT, and from 2004 to 2006, he was as a columnist for Ekho Moskvy radio station. Between 2007 and 2014, he was the Program Director of the Mayak radio station. At the same time, he was the chief producer of the Vesti FM radio station. In 2014-2016, he was the chief producer of the Kommersant FM radio station. In 2016, he worked as a presenter of the Radio Kuzichev program on Tsargrad TV. In 2016 and 2018, he hosted the pre-election debates of candidates for members of the State Duma and candidates for President of Russia on Channel One. Since 2017, he has been hosting the Vremya Pokazhet (Time Will Show) talk-show on Channel One together with Artyom Sheinin and Ekaterina Strizhenova. On August 12, 2016, he was elected secretary of the Union of Journalists of Russia.

Complicity in the legitimization and propaganda of the Putin regime.

The basis of Kuzichev’s accusation is public support for Russia's aggressive policy towards Ukraine, as well as the active role of the host of one of the most notorious propaganda shows on Russian TV, which has been actively used for many years to spread lies, indoctrinate chauvinistic ideology, incite hatred of Western democracy.

The talk show Time Will Show has been airing on one of the main Russian TV channels since the fall of 2014. It uses standard propaganda patterns and successfully serves the main task, that is, to fool a non-critical audience and distract it from domestic Russian problems by switching to a constant search for external enemies. The features of this show on Channel One include its significant time on the air (shows may last for several hours a day).

The Time Will Show is also distinguished by its particularly active participation in strengthening the authoritarian regime in Russia and shaping the image of the “national leader” Vladimir Putin. Special episodes of the program that last for two to three hours are usually accompanied by official propaganda rituals of the “communication with the people” before and after the so-called “messages from the President of the Russian Federation,” press conferences with Putin, and “a direct line with the President.”

The Insider’s investigation, which analyzes the propaganda channels on Russian TV, indicates that the show uses “fake experts” and “dummy enemies.” “Michael Bom is a former insurance agent who moved to the United States from Russia. In the talk-show, he is presented as an “independent journalist” although he never worked as a journalist and only wrote op-eds for the Russian newspaper in English, The Moscow Times. Kovtun, another recipient of Kremlin’s paychecks, plays the role of an official enemy of Russia. He looks like a complete pro-Ukrainian warrior, but receives checks from the Russian TV.” The propaganda nature of the show is also clearly manifested in the selection, and presentation of topics for discussion.

In July 2017, the Ukrainian website Myrotvorets that monitors the Russian propaganda and military intervention in Ukraine blacklisted Anatoly Kuzichev for “conscious violation of the state border of Ukraine when entering the territory of the Russia-occupied Crimea and anti-Ukrainian propaganda.”