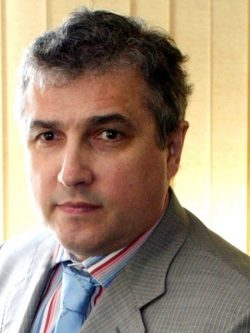 KULISTIKOV, Vladimir Mikhailovich (b. 1952) is a Russian media manager. Born in East Germany where his parents worked at the Soviet-German uranium enterprise, he graduated from the faculty of International Journalism MGIMO in 1974. After that, he worked at the USSR Ministry of Foreign Trade, then at the Institute for Scientific Information on Social Sciences. In 1985, he became Deputy Editor-in-Chief of the Novoye Vremya magazine. In 1990–1993, he was a correspondent for the Arab newspaper Al-Hayat in Moscow, in 1993–1996 he collaborated with Radio Liberty.

In 1996, he began working on NTV channel, as Chief Editor of the information service, Deputy General Director, host of the Hero of the Day program. Between 2001 and 2002 he was the Chief Editor and First Deputy General Director of NTV. In 2002-2004, he was Deputy Chairman of the All-Russian State Television and Radio Broadcasting Company (VGTRK) and Director of the Information Programs Directorate of the Rossiya TV Channel. From July 5, 2004, to October 21, 2015, he was the General Director and Editor-in-Chief of NTV. Since October 2015, he has been an adviser to the Director-General of VGTRK and the columnist at Life.ru and the Moskovsky Komsomolets newspaper.

Complicity in the legitimation and propaganda of the Putin regime.

The main basis for the accusation of Kulistikov is the official position of the head of one of the largest Russian media holdings, which has been actively used for propaganda purposes for many years. He personally ordered and executed pro-Putin and anti-opposition propaganda. He consciously exchanged high authority in the professional media environment for absolute loyalty to the ruling regime, becoming one of his accomplices and beneficiaries.

The day after his appointment as General Director on NTV, Kulistikov closed the popular political talk show “Freedom of Speech” with Savik Shuster and NTV’s broadcast quickly became filled with low-quality crime series and tabloid programs that successfully solved the tasks of “fooling” a mass Russian audience.

From 2005 to 2008, NTV hosted the program of Gleb Pavlovsky and Maxim Kononenko “Real Politics”. According to the frank admission of the authors, it was a “purely propaganda show”, directly aimed at strengthening the authoritarian regime of Vladimir Putin. In the future, the channel not only preserved but also increased the intensity of Putin’s propaganda as “the leader of the nation”. By no coincidence, it was Kulistikov who produced the propaganda film “One Day with V.V. Putin”.

NTV, led by Kulistikov, became the leader of frenzied, aggressive and deceitful propaganda against the Russian opposition. In the mid-2000s, the channel showed several propaganda films, contributing to the formation of the image of “the enemies”. These included Mikhail Khodorkovsky and Yukos case (“Yukos Gangs”, “Prepaid Terrorist Attack”), Georgian leader Mikhail Saakashvili (“Misha”), Boris Berezovsky and Viktor Yushchenko, as well as the opposition leader Garry Kasparov (“Who orders chaos?”). Kulistikov cynically declared that if the Kremlin had not restrained him, then “based on my personal stance, they [films] would have been even tougher”, and “the non-systemic opposition, which casts doubt on all the existing institutions of Russian power, aims to violate the rule of law in the streets and wants to come to power bypassing the elections, with someone else’s help”.

NTV under Kulistikov gained the dubious fame of the “snitch channel”. As an example, the Anatomy of Protest series on the “fifth column” was produced in the classic format of fake investigations, and introduced the lie that the non-systemic opposition allegedly organized paid provocations, and was supervised by the American embassy and prepared the “Orange Revolution”. These fake materials became the basis of real criminal cases against activists and leaders of civil protests, known as the Bolotnaya Case.

NTV, led by Kulistikov made a significant contribution to the advocacy of acts of international aggression by the Russian regime and crimes against humanity, including the war with Georgia, the occupation and annexation of Crimea and military operations in Eastern Ukraine, the downing of MH17, the assassination of Litvinenko, et al. Most of the channel’s programs were used for the effective performance of the hybrid warfare tasks unleashed by the Kremlin. In 2014, the Security Service of Ukraine at the request of the National Council of Ukraine on Television and Radio Broadcasting banned the entry to the territory of Ukraine to 49 Russian media persons, including Kulistikov, taking into consideration their active participation in the information war and support for the annexation of Crimea. It is noteworthy that after leaving NTV, Kulistikov continued to act as a propagandist, promoting a standard set of anti-Ukrainian and anti-Western theses.

The Putin regime granted Kulistikov the highest state awards, including the orders “For Merit to the Fatherland”, the Order of Honor, letters of honor and many thanks from the government and the President of Russia “for a great personal contribution in the development of domestic media and merits in ensuring the implementation of the state information policy”.

NTV to Abandon ‘Freedom of Speech’