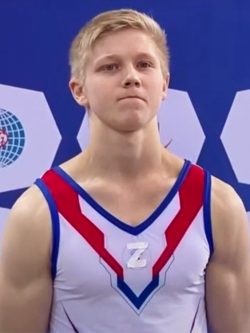 Russian gymnast. Champion of Russia among juniors in 2019 in all-around and floor exercises, silver medalist in the horizontal bar exercise.

Public support for the aggressive war unleashed by Vladimir Putin against Ukraine.

In March 2022, Kuliak wore a "Z" sticker on his chest during the medal ceremony of the parallel bars competition at the 2022 FIG Artistic Gymnastics World Cup series in Doha.] "Z", a letter which is not part of the Cyrillic alphabet, is a tactical marking used by some Russian invading forces in Ukraine. Thus, it has become a pro-war symbol. Kuliak displayed the symbol while standing on the podium next to a Ukrainian athlete, Illia Kovtun, who won the event. The FIG prior to the competitions decided to exclude Russian athletes from the competitions, but the prohibition only entered in force on 7 March.

On 6 March the FIG announced that they will ask the Gymnastics Ethics Foundation to open disciplinary proceedings against Kuliak. In a subsequent interview, on Tuesday 8 March, Kuliak said that he had no regrets and would "do exactly the same". On 18 March, he appeared at the 2022 Moscow rally wearing an Olympic medal, though he has not competed in the Olympics.

On 17 May the FIG sanctioned Kuliak with a one-year ban, ending May 17, 2023 or six months after the ban on Russian athletes is lifted and ruled that he is to be stripped of his bronze medal and prize money.

On 14 September it was announced that Kuliaks appeal against his suspension was partially upheld. The Gymnastics Ethics Foundation (GEF) Appeal Tribunal found that the one-year sanctions should be independent from measures preventing Russian gymnasts from competing at FIG events. This means his suspension will last until May 16, 2023