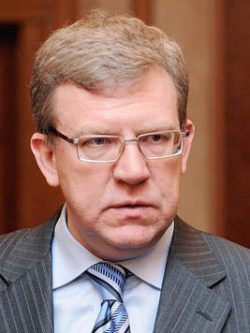 KUDRIN, Alexey Leonidovich (b. 1960 in Dobele, Latvia) graduated from the Economics Department of Leningrad State University in 1983, after which he got a job as an intern at the Institute of Social and Economic Problems of the USSR Academy of Sciences. In 1985-88, he was a graduate student of the Institute of Economics of the USSR Academy of Sciences. After receiving a Ph.D., he worked at the same institute. In October 1990, he became Deputy Chairman of the Committee on Economic Reform of the Executive Committee of the Leningrad City Council, in November 1991 - Deputy Chairman of the Committee on Economic Development of St. Petersburg, in August 1992 - Chairman of the Main Financial Directorate of the City Hall of St. Petersburg, and in 1993 - the First Deputy Mayor of the city, Anatoly Sobchak, and the Head of the Committee of Economics and Finance of the City Hall. At that time, Kudrin became close to Vladimir Putin, who was also Sobchak's deputy.

After Sobchak lost the elections in St. Petersburg in 1996, Alexei Kudrin resigned and moved to work in Moscow. In the capital, he became deputy head of the Presidential Administration and, at the invitation of Anatoly Chubais, the head of its Main Control Directorate. After Chubais was appointed the Minister of Finance of Russia, Kudrin became his deputy. Vladimir Putin, who became president in 2000, almost immediately appointed Kudrin the Minister of Finance of the Russian Federation. Kudrin stayed at this post for an unusually long time, heading one of the key ministries of the Russian Cabinet for over 11 years. At the same time, Alexey Kudrin was also the Deputy Prime Minister for most of this period. Disagreements between Kudrin and Dmitry Medvedev over the budget spendings led to an open debate, and in late September 2011, Kudrin had to resign.

After his resignation from the government, Kudrin became the dean of the Faculty of Liberal Arts and Sciences at St. Petersburg University. On April 5, 2012, Kudrin announced the creation of the Committee of Civil Initiatives. This committee included many Russian “systemic liberals” and even several oppositionists, experts in various fields of politics, economics, science, and culture. From November 1, 2013, Kudrin was also a member of the presidium of the Presidential Economic Council, and from January 2016 to November 2018, he headed the Strategic Research Center. The latter also serves the interests of the Russian authorities, though formally considered an NGO. On May 18, 2018, at the proposal of the United Russia party, the State Duma approved Kudrin as Chairman of the Accounts Chamber.

- The financial support of the Putin regime as Minister of Finance, which he carried out for over 11 years. At that time, huge amounts of money were spent on the reorganization and development of the repressive bodies, which suppressed protests and persecuted dissidents, the army that fought in Chechnya, Georgia, and Ukraine, special security agencies, that actively involved in criminal activities at home and abroad.

- Corruption. Being currently the head of the Accounts Chamber of the Russian Federation, the main officially appointed Russian fighter with illegal enrichment of officials and members of their families, Kudrin owns real estate worth about 2 billion rubles. Kudrin also repeatedly testified in a few criminal cases but has never been involved in any of them or other cases as an accused. These are, for example, the “Case of the 20th Trust” back in 1999 (or about state loans of a private company), the criminalization of the funeral services market, abuses in housing loans, frauds with elite real estate. All of them date back to his work in St. Petersburg. Note that any honest investigation into these cases under Putin’s dictatorship is hardly possible.

- Participation in the neutralization of the White Ribbon protests in 2011-2012 and its consequences by pushing the “moderate agenda” for the opposition to preserve Putin’s personal power regime. This includes the activities of Kudrin in the Civil Initiatives Fund that he created, at the Gaidar Forum, which is becoming more pro-Kremlin every year, at the Center for Strategic Initiatives, and other structures intended to substitute for civil society.

- Complicity in the robbery of the Russian population dependent on the state budget. It is, first of all, about the initiation and support of the pension reform. This reform ultimately boiled down to an increase in the retirement age or to the seizure of pension savings from a large part of future retirees(except for the siloviki). The “reform” was carried out against the backdrop of the catastrophic impoverishment of the working population of Russia, living outside of Moscow.

- Lobbying the interests of the Kremlin in the West. During his visits there, he constantly tries to influence the leadership of developed countries to abandon new sanctions against the Putin regime and its beneficiaries, considering these sanctions “unjustified” and the existing ones “generally ineffective” but at the same time “must be abolished,” justifying the policy of his employers in the Kremlin. The direct harm from his activities in this field is that he, as a “liberal in the Russian government,” is still considered a reputable Russian official in the West.