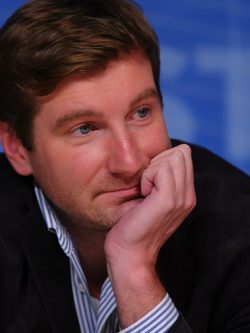 Russian journalist, director of the Russian-language broadcasting of TV channel RT, financed by the Russian government. Author and host of the Antonyms program. As a political strategist, he headed the campaign Mikhail Prokhorov in the 2012 presidential elections and the campaign Ksenia Sobchak in the 2018 presidential elections. Chairman of the Board of the Charitable Foundation AIDS. Centre.

Anton Vyacheslavovich Krasovsky was born on July 18, 1975 in Podolsk. He has been a journalist since 1995. Together with the writer Sergei Minaev, as well as the former producer of the Comedy Club Artak Gasparyan, he was the creator of the Kontr TV channel. On December 11, 2012, the Kommersant newspaper reported that according to the tax services, the 100% founder of the TV channel is the Institute for Socio-Economic and Political Research (ISEPI), created on the initiative of the Presidential Administration of Russia, and headed by the former deputy head Department of the President's Internal Policy Dmitry Badovsky. Soon, however, Krasovsky was fired from the TV channel. Then he said in an interview with the Snob webzine that the Kontr TV channel was a “Kremlin project whose purpose is propaganda.” He worked in the headquarters of Mikhail Prokhorov in the 2012 presidential elections and in the headquarters of Ksenia Sobchak in the 2018 presidential elections (without an official contract), from which he was dismissed on March 1, 2018. After the announcement of the results of the presidential elections, he commented on their outcome as follows: “Love Putin or leave and spit on Russia” (Echo of Moscow, Anton Krasovsky's blog, March 19, 2018). Since 2019, he has been cooperating with the propaganda TV channel RT. In October 2020, he was appointed director of broadcasting in Russian at RT.

The propaganda of hatred and open threats against opponents of the Putin regime in Russia, the use of information obtained during the illegal wiretapping of the conversations of Russian opposition figures.

In 2021, politician and psychologist Leonid Gozman, who participated in Krasovsky's Antonyms program to RT, accused the RT employee of using the illegal wiretapping of the politician. Krasovsky learned about Gozman’s conversation with sociologist and journalist Igor Yakovenko, which had taken place a couple of hours before the interview. Following this event, an article was published in Novaya Gazeta (Three of us Love: Comrade Major and I and Anton Krasovsky, NG No. 25 dated March 10, 2021), in which Leonid Gozman announced a violation of the secrecy of his telephone conversations. This story further developed in mutual lawsuits, which ultimately ended with the Moscow Arbitration Court ordering Novaya Gazeta to remove Leonid Gozman's article on July 27, 2021, and the author himself to pay journalist Krasovsky 300,000 rubles in moral damages. As follows from this court decision, “the court found the channel and the journalist defamatory, as well as untrue, the phrases from the article about Gozman's distrust of RT, his motivation to participate in the program, as well as the politician's indignation at Krasovsky's awareness of his telephone conversations.”

Krasovsky is known for his repeated disparaging and offensive remarks about participants in opposition protests in Russia. In particular, in one of the broadcasts of the Antonyms / Anton and Us program, the journalist called those who took part in the protest on April 21, 2021, “morons” and “extremists.” Here are more detailed quotes from the then air of Anton Krasovsky: “We are the authorities here! And we will not give you this power nichrome and never,” “Be glad that Vladimir Vladimirovich Putin is in power, and not such a person as me; if I were in power, I would have tied you all up and drowned you in this Moika river,” “If all of you, that is, this insignificant crowd of morons, are put in the Kresty jail for five years, no one will regret it. Everyone will be happy. The country will breathe freely. Fortunately, you are dying in some unknown way, apparently from drugs”. (Antonyms Program, April 22, 2021).

He also supports compulsory vaccination and reprisals against people who refuse to be vaccinated with Russian-made COVID-19 vaccines for ideological and other reasons, comparing the latter with “deserters” who “must be dealt with according to the laws of wartime.”