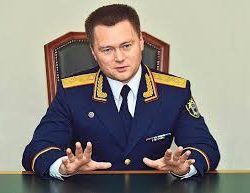 KRASNOV, Igor Viktorovich (b. 1975 in Arkhangelsk) graduated from Pomor State University in 1998, and a year earlier he had begun serving as an investigator at the prosecutor's office in the Kholmogory district of the Arkhangelsk region. In Arkhangelsk, he rose to the post of investigator for particularly important cases in the regional prosecutor's office. In 2006, he was sent to Moscow to lead the investigation team to investigate the attempt on Anatoly Chubais. It is noteworthy that all the defendants in this case (including the son of the former press minister, Ivan Mironov, and Colonel Vladimir Kvachkov) were twice acquitted by the court. Kvachkov was later sentenced to 13 years in prison on another charge of promoting terrorism and attempting to organize an armed rebellion.

In 2007, Krasnov was transferred to the Investigative Committee. He worked as a senior investigator for particularly important cases under the chairman of the Investigative Committee. Investigator Krasnov gained fame in 2009 when he led the investigation into the murder of lawyer Stanislav Markelov and Novaya Gazeta journalist Anastasia Baburova. The killers, members of the Combat Organization of Russian Nationalists (BORN), Nikita Tikhonov and Yevgenia Khasis, were detained in November of the same year. Krasnov also led other cases related to BORN: the case of the murder of judges Eduard Chuvashov, anti-fascists Fedor Filatov, and Ilya Dzhaparidze. BORN ideologist Ilya Goryachev was eventually sentenced to life imprisonment.

Krasnov also led an investigation into the theft of funds allocated for the construction of the Vostochny spaceport, the corruption case of ex-colonel of the Ministry of Internal Affairs Dmitry Zakharchenko, the case of the execution of the last tsar’s family, and the case of the murder of Alexander Litvinenko in London. However, the most resonant of his cases was the investigation into the murder of opposition politician Bors Nemtsov on February 27, 2015, in downtown Moscow. Investigators identified the killers shortly after but failed to reach out to organizers and paymasters. Also, despite investigative orders, Ruslan Geremeev, a suspect in the organization of a crime, Ramzan Kadyrov’s companion, was not arrested and brought to Moscow. Soon, the case was taken away from Krasnov and transferred to Major General Nikolai Tutevich.

In April 2016, he was appointed deputy head of the Investigative Committee. On January 20, 2020, President Putin proposed Krasnov's candidacy for the post of Prosecutor General of the Russian Federation. The Council of Federation unanimously adopted the decision on the appointment at the plenary session on January 22, 2020.

Professional and non-public investigator Krasnov replaced Prosecutor General Yuri Chaika, who became too toxic for the Kremlin due to the high-profile corruption and criminal scandals associated with him and his sons. Krasnov is considered a member of the team of the head of the Investigative Committee, Alexander Bastrykin, who, in turn, is associated with the Malyshev organized crime group, whose activities were investigated by the Spanish prosecutor's office. There is not enough direct evidence of Krasnov’s involvement in direct implementation of political repression, but several shreds of evidence and indirect facts speak of his unsightly role in a few politically motivated cases.

All key investigative actions in the case of the murder of Nemtsov were carried out under the leadership of Krasnov. Krasnov interrogated the accused, including the alleged killer Zaur Dadaev. He also checked the evidence on the spot with the participation of another accused, Anzor Gubashev, who told how the surveillance of the politician was organized. This evidence became key in the trial by jury, although the defendants reported about the pressure from the investigation. For example, Dadaev claimed that Krasnov himself dictated the testimony to him. Three months after the start of the investigation, the case was transferred from Krasnov to investigator Nikolai Tutevich.

According to the lawyer of Boris Nemtsov’s family, Vadim Prokhorov, “Krasnov is really an effective investigator - he can find [criminals]. But on the other hand, he is a man of the system. At the beginning of the investigation into the murder of Nemtsov, it was necessary to find killers and he really found them, but as soon as he began to get to the organizers, he himself was eliminated - by promotion.” The paymaster in the case of Nemtsov's murder has not yet been established. In February 2019, Krasnov, in an interview with Kommersant, said that there was progress concerning the personalities of the paymaster of Nemtsov’s murder, but “it’s premature to bring them to the public.”

According to attorney Sergei Badamshin, it is Krasnov who “directly controls the investigation” of the case of Rostov’s Open Russia activist Anastasia Shevchenko, who became the first Russian accused in the case of participating in an “undesirable organization.” On January 18, 2020, it became known that the investigators installed a hidden camera in the activist’s bedroom and conducted secret recordings for four months. Also, as deputy head of the Investigation Committee, Igor Krasnov signed a decree on the creation of an investigation team in the case of ex-Minister of Economic Development Alexei Ulyukaev. The FSB sent him a complaint against an American investor, Michael Calvey, who then became the defendant in a trumped-up fraud case.

Evidence of Ivan Mironov, acquitted by a jury in the case of the assassination attempt on Anatoly Chubais: “I think that such a person appearing in the post of head of the country's main supervisory body is not by chance. I believe that Krasnov is perhaps one of the toughest figures in the Russian siloviki bloc. In my opinion, such people in such posts can be seen when harsh and uncompromising instruments are needed to resolve the country's internal political life issues. Again, we can assume: the Prosecutor General will get new opportunities to control the country's socio-political life.”

On March 2, 2021, the US authorities announced the introduction of personal sanctions against a number of Russian officials, including Igor Krasnov.