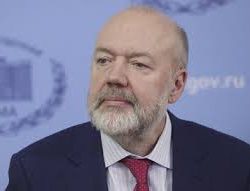 Member of the State Duma of the Russian Federation, co-chair of the working group on the preparation of proposals for amendments to the Constitution

KRASHENINNIKOV, Pavel Vladimirovich (b. 1964) graduated from the Magnitogorsk Construction College in 1983 and the Sverdlovsk Law Institute in 1989. After graduation, he worked as an instructor in the department of civil law. In 1990-1993, Krasheninnikov was an expert on legal issues at the Supreme Council of the RSFSR, deputy head of the main department for the housing policy at Gosstroy. In 1993, he was appointed head of the Department of Civil and Economic Legislation of the Ministry of Justice of Russia. In 1996-1997, he worked as Deputy Chairman of the State Committee of the Russian Federation for Antitrust Policy and Support for New Economic Structures.

In 1997, he was appointed to the post of First Deputy Minister of Justice of the Russian Federation. In 1998, he became Minister of Justice of the Russian Federation, however, he worked in this post until August 1999. On December 19, 1999, Krasheninnikov was elected to the State Duma on the federal list of the Alliance of Right Forces (SPS) electoral bloc. There, he led a committee on legislation. From 1999 to 2010, Krasheninnikov was the rector of the Russian School of Private Law. In 2003, he was re-elected to the State Duma from the SPS, but soon left the liberal party and moved to United Russia. In the new composition of the Duma, he heads the parliamentary committee on civil, criminal, arbitration, and procedural legislation.

In 2007, 2011 and 2016, Pavel Krasheninnikov was re-elected to the State Duma from United Russia, and he headed the Committee on State Building and Legislation in 2016. Until February 2016, he was a member of the General Council of United Russia. Since 2009, he has been Chairman of the Russian Bar Association. In 2018, he became the head of the Council for the Improvement of Civil Law under the President of the Russian Federation. On January 15, 2020, by order of Vladimir Putin, Pavel Krasheninnikov was appointed co-chair of the working group to prepare proposals for amendments to the Constitution of Russia.

Complicity in the constitutional coup, initiating and promoting oppressive bills.

Parliamentarian-defector Krasheninnikov bears responsibility for the constitutional and legal drafting of Putin's dictatorship. Despite the declared “liberality” and adherence to the law, from the very beginning of Putin’s rule, he followed in line with toughening the legislation that is being used against the opposition to the regime. His appointment as co-chair of the working group to prepare proposals for amending the Constitution in 2020 indicates his high role in the Putin system and his undoubted loyalty to its basis.

Back in 2002, Krasheninnikov, as the chairman of the State Duma committee on legislation, promoted Putin's bill on countering extremism. The law significantly expanded the definition of extremism and supplemented the notorious Article 282 of the Criminal Code with the sub-articles “Organization of an extremist community” and “Organization of the activities of an extremist organization.” A few years later, as the regime tightened, these articles became the main tool of political persecution against opposition activists of various views.

In the summer of 2012, Krasheninnikov was one of the authors of the bill that again criminalized slander, which had been excluded from the Criminal Code in December 2011. He proposed to establish a maximum fine for libel in the amount of five million rubles. Despite the protests of the journalistic community, which saw the bill as a threat to freedom of speech in the country, it was approved by parliament on July 13. The context is important here: since the summer of 2012, the State Duma began to issue a series of repressive laws as a targeted response to the mass protests of 2011-2012. Leader of the “For Human Rights” movement Lev Ponomarev described Krasheninnikov’s initiative as follows: “There is a further tightening. They have introduced huge fines for civil activists for rallies, they want to destroy non-profit organizations that receive foreign grants. Now here is another initiative.”

On January 15, 2020, Putin appointed Pavel Krasheninnikov as co-chair of the working group to prepare proposals for amending the Constitution of Russia. Already on March 14, 2020, Putin signed the law on constitutional amendments prepared by the Krasheninnikov group. These amendments, and, in particular, the amendment on “nullification of the presidential term” are aimed at the direct, lifelong usurpation of power by Vladimir Putin. They completed the constitutional and legal drafting of Putin’s dictatorship and are regarded by the Free Russia Forum as an illegitimate and anti-democratic constitutional coup.