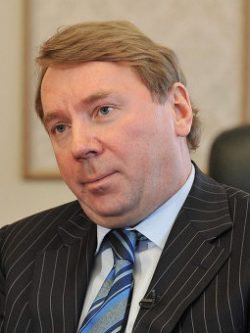 KOZHIN, Vladimir Igorevich (b. 1959) is the First Deputy Chairman of the Federation Council Committee on Defense and Security, a former Head of the Office of the President, then Assistant to the President of Russia for military-technical cooperation. According to unofficial information, he is the Lieutenant General of the FSB. He graduated from the Leningrad Electrotechnical Institute in 1982, the University of Marxism-Leninism in 1984, the North-West Academy of Public Administration in 1999. In 1982-1986, he was an instructor and head of the department of the Petrograd district committee of the Komsomol in Leningrad. Between 1986 and 1989, he was an engineer, senior engineer and chief specialist at Azimut Plant.

In 1989-1990, he interned in Germany, at the Higher Commercial School of the Academy of Foreign Trade (according to one version, this was a cover for the KGB). In 1991, he became a co-founder and director of the Russian-Polish joint venture Azimut International. In 1993-1994, he was a General Director of the Association of Joint Ventures of St. Petersburg. Between 1994 and 1999, he headed the North-West Regional Center of the Federal Service for Currency and Export Control of Russia (FSVEC of Russia). In 1999–2000, he was the Head of the FSVEC of Russia. Between 2000 and 2014, he served as the Head of the Office of the President of the Russian Federation. In 2014–2018, he was the Assistant to the President of the Russian Federation on military-technical cooperation. Since 2018, he has been a Member of the Federation Council.

Direct complicity in the implementation of the criminal policy of the Russian leadership in the highest posts of the power hierarchy of the Putin regime. He is one of the architects of a state-corruption system (kleptocracy), the main beneficiaries of which are members of the inner circle of Vladimir Putin.

Kozhin met and became close to Putin in the early 1990s. Kozhin then headed the Russian-Polish enterprise Azimut International Ltd and was one of the active participants in the Leningrad Association of Joint Ventures, created with the assistance of the Leningrad Regional Committee of the CPSU and the regional KGB department (its leadership included Yuri Kovalchuk and Vladimir Yakunin, Putin's future partners in the Ozero summer house cooperative). Putin served as chairman of the Committee on Foreign Relations of the St. Petersburg Mayor's Office at that time and oversaw all foreign economic activity of the region.

In 1991, Kozhin introduced his longtime acquaintance Gennady Timchenko to Putin, who later became one of the most influential members of the “Putin oligarchy.” In May 1995, Kozhin joined the movement Our Home - Russia (Putin was then the Chairman of the St. Petersburg Regional Council of the movement).

Heading first the North-West Center of the Federal Service for Currency and Export Control of Russia, and then the whole agency, Kozhin lobbied for a few corrupt decisions (including the exemption of Otis Elevators and Rotmans Tobacco from taxation). He was also suspected of major financial irregularities and the use of budgetary funds for personal purposes. The Prosecutor's Office opened criminal proceedings on the issue, but thanks to influential patrons they were all terminated.

The main result of Kozhin’s fourteen-year career as head of the President’s Office was the formation of Putin’s multi-billion dollar property. The main mechanism was the transfer of numerous properties from federal to presidential ownership. Among them were the Moscow Kremlin, Senate and Synod complex in St. Petersburg, as well as hundreds of real estate, transport, and infrastructure facilities in Russia and dozens of other countries.

Under the leadership of Kozhin, immediately after the annexation of Crimea in March 2014, the Office of the President organized an audit of Ukraine’s state facilities, residences, and hotels in Crimea for registration in the ownership of Russia. In March 2014, Kozhin was included in the US sanctions list as one of the direct participants in Russia's aggression against Ukraine and the annexation of Crimea. According to analysts, Kozhin's lost his post due to the sanctions.

Kozhin, like most members of Putin's inner circle, has been convicted of numerous episodes of personal enrichment at the expense of the budget.

Indirect evidence of Kozhin’s complicity in the activity of the criminal regime is his receipt of the highest state awards, including the Orders of Honor, For Services to the Fatherland of all degrees, Friendship, and Alexander Nevsky.

Treasury Sanctions Russian Officials, Members Of The Russian Leadership’s Inner Circle, And An Entity For Involvement In The Situation In Ukraine